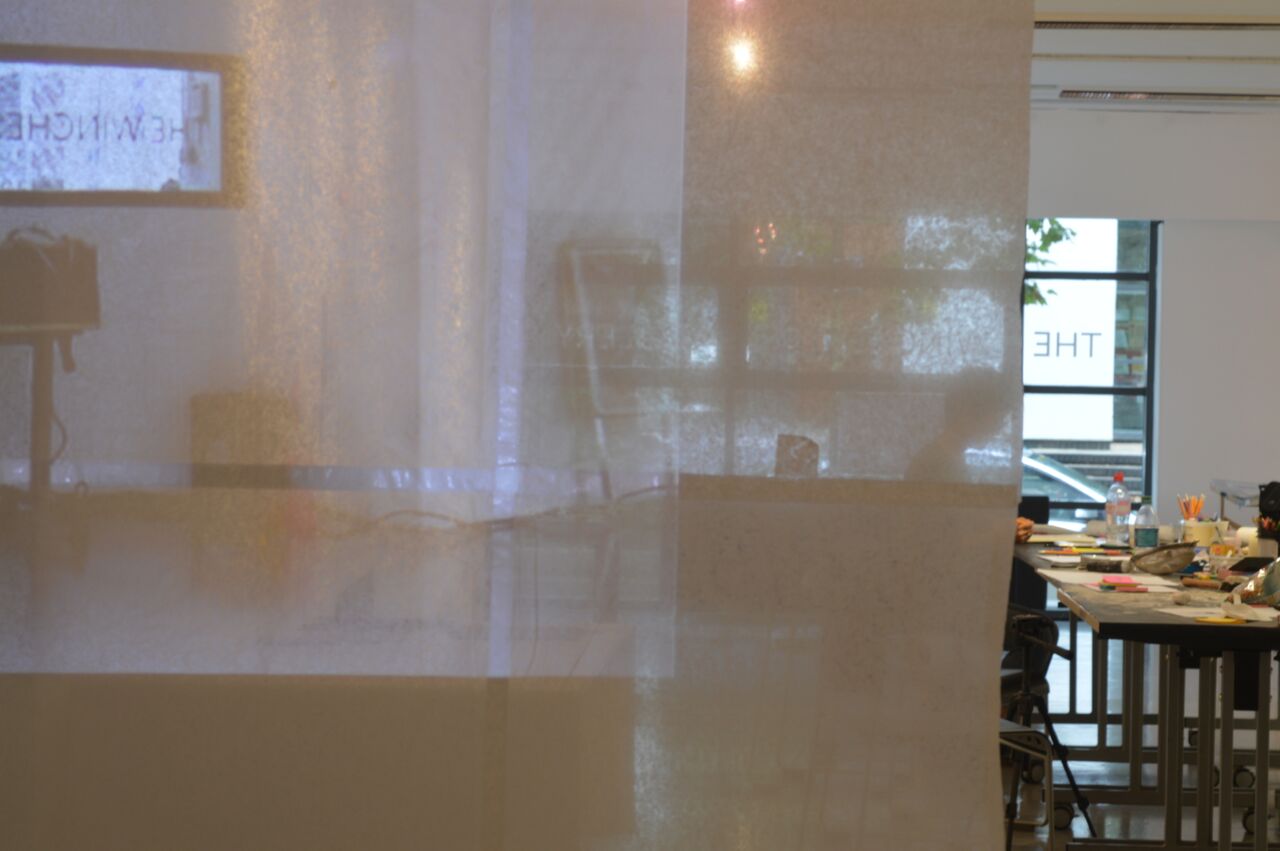 The Phenomenology and Imagination Research Group (PIRG) meets once a month in the WSA PhD study room to examine text through conversational methods. The group recognizes conversation as a ‘cooperative venture’ (to use Allan Feldman’s words), where reading together, enquiring, sharing and listening is understood as a collective act which leads to the production of new knowledge, understanding and thoughts. PIRG has been developing the idea of conversation as a collaborative research method and the three-day research lab in the Winchester Gallery was an opportunity for the group to extend their research approach to the wider audience to further explore ideas around conversation as a verbal and non-verbal inquiry process. The event encompassed activities of making and drawing as well as an exhibition of new works by the group members. PIRG has organized similar events at the 10 days Winchester Arts Festival in 2015 and more recently at University of Birmingham, where situations of material thinking and thinking through material as a way into phenomenological inquiry were offered to invited audiences. In the article ‘Conversation as Methodology in Collaborative Action Research’, Feldman points out that the cooperative aspect of conversation is what makes the participants feel as if they are ‘partners in the endeavour’ that allows conversations to have ‘directions but not to be directed solely by one participant’ (Feldman, 1999). Typically at the monthly PIRG meetings, the selected text presents the group with the conversational framework. During the three-day event the gallery space became the ‘container’ to prompt and hold the conversations. Certainly during the installation of the exhibition, the gallery literally became the space for the group to engage in a collective endeavour to ensure individual and group requirements were met. The process involved exchanges amongst the group members and thoughtful engagement with the artworks. As the exhibition started to take shape, the works themselves also entered into a dialogue with one another bringing to light both commonalities and differences of their themes, materials and processes that created interesting connections and flows. A workshop area, which consisted of a long table with various objects and drawing materials and a large expanse of wall covered in paper, was also created in the gallery space. During the workshops that took place over the second and third day, the group gathered around the table to converse on various topics, such as material imagination, creativity, and notions of aesthetics – areas of common research interest for the group and to draw, write and make in response to the exchanges that took place.

The collaborative process of conversation brings people together to speak, to listen, to question, to investigate, to reflect and to learn. As Professor Simon Keyes at University of Winchester’s Centre of Religion, Reconciliation and Peace describes, dialogue and conversation is a process of collaborative thinking. The three-day research lab gave the group an extended length of time to participate in conversational methods of exchange and to ‘think together’, which was pleasurable as a group experience but also helped to consolidate some of the ideas on conversation that the group have been examining. Professor Keyes emphasized that conversation is a ‘non-rational’ process that must remain free from goals and conclusions. This is what makes conversation fundamentally different from discussion and debate where some form of end result is expected from the outset. The cooperative venture of conversation helps to formulate new understandings and knowledge that are vital for putting together future action plans and developing new theories. It brings about growth to the way we think about things and for this, conversation holds potential to be acknowledged as a vital form of research for critical inquiry.

Conversation certainly served as the ‘glue’ for the group during the three-day research lab and helped to ‘maintain the integrity of the group’ (Feldman, 1999). However, the group also recognized that the open nature of the event failed to attract sufficient public interest. This brought to light the importance of legibility, accessibility and communicability of one’s work, be it apiece of academic writing or visual artwork. Following on from the three-day research lab, the group has started to examine these areas through series of collective drawing exercises supported by texts on embodiment of practice and knowledge creation.

Professor Simon Keyes’ quotes were taken from notes made by myself at the ‘Understanding Dialogue – From Theory to Practice’ seminar at University of Winchester on 24th May 2016.