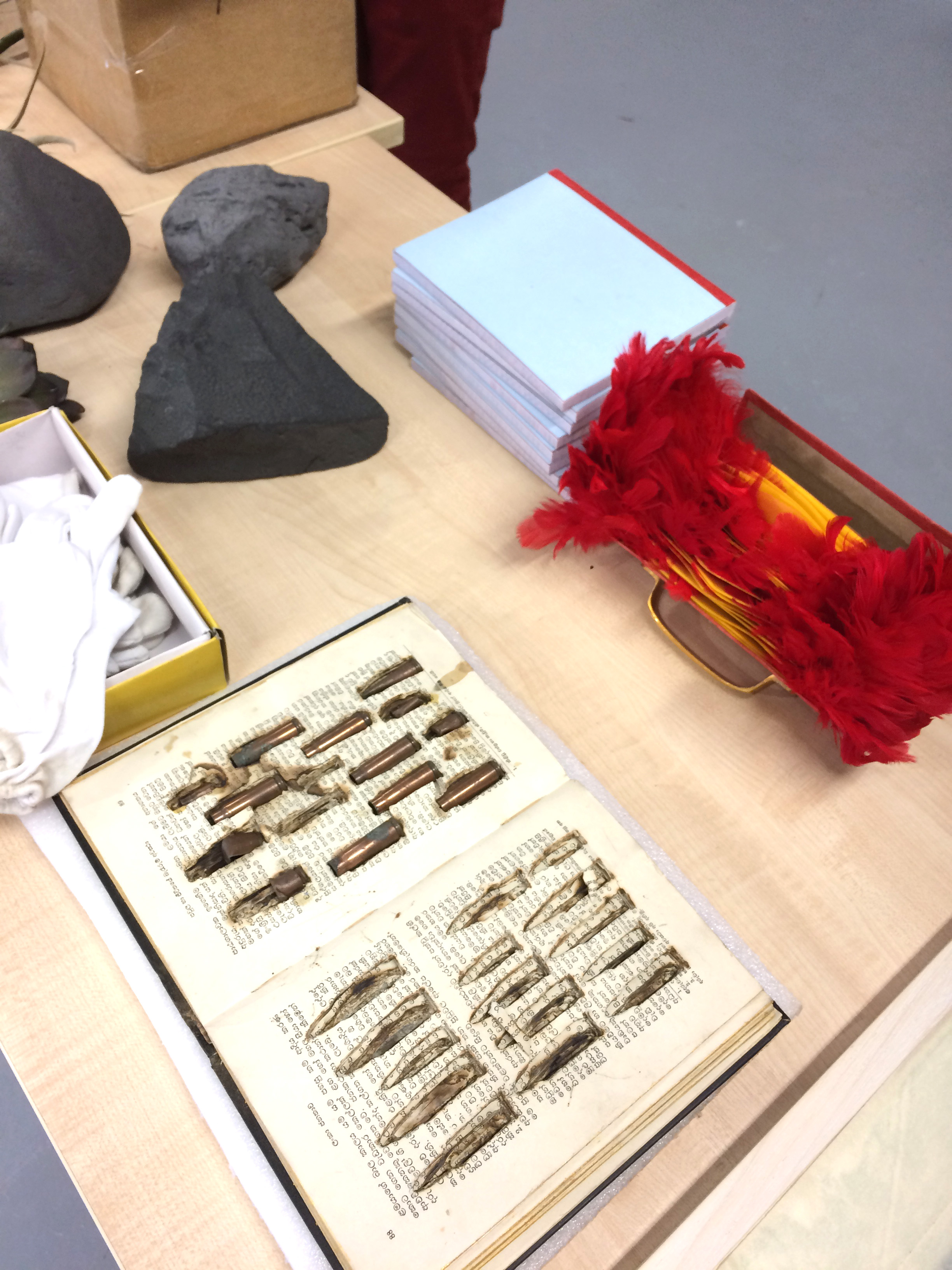 The exhibition, Reading Room: Leaves, Threads and Traces (November 2015), exhibited book art originally shown in Delhi and at the Colombo Art Biennale, Sri Lanka (2014) and Kochi-Muziris Biennale, India (2014). Working in collaboration with Blueprint 12, these shows were curated by Amit Jain, joined staff and students at Winchester School of Art for the seminar and the installation of works. The original shows of ‘Reading Room’ featured works by fifteen artists from across the world. Many of these works were shipped over for a new iteration of the show, and which were brought into dialogue with a selection from the Artists’ Books Collection held at the Winchester School of Art Library, which comprises book art from the 1960s to the present day. The seminar will be co-convened by Sunil Manghani, Amit Jain, August Davis, and Linda Newington.

As the final wall text produced for the show explains:

In placing items from the School’s own collection alongside the visiting collection of book art from South Asia, the themes of leaves, threads and traces are explored. It brings to the fore both the physicality of books – their material properties and relationship to material culture – and an imagination of books. This edition of Reading Room opens up how we interleave, draw together and re-trace thoughts, beliefs and emotions within the boundaries of a book and the cultures in which they circulate.

Preliminary curatorial decisions, such as the objects to be made available for display, had already been made in lead up to the installation of the show. However, the all-important positioning of the objects, the handling of the space, and the ‘journey(s)’ laid out for the viewer – the exhibition making as a practice – was to be carried out by the postgraduate research group in just three days. Amit Jain, who had curated the two previous exhibitions and brought the books over from India, purposely played little part in the decision-making processes. He was interested to see how his exhibitions would be re-made, and how he would himself learn from the process. Amit made it clear from the start that the final exhibition, whatever shape it was to take, could never be perceived as a failure in either curatorial or pedagogic terms, but that the processes of making and juxtaposition, and the subsequent viewing by the public, would serve as a practical site of learning. Like all the events in the re:making series, this was designed as a collaborative and experimental task for PhD students; it was to be an intensive project that would thoroughly test the proposition of thinking through making that is key to this seminar series. The book is a mini exhibition space in itself: it has content and it has a physicality and a three dimensional space through which to navigate this content. Reading Room could be perceived then as an exhibition of interrelating exhibitions—a difficult and interesting curatorial notion to begin with. As we all know, the navigation of both books and exhibitions is not always linear, it is a complex back and forth interaction, often with multiple visits to certain parts. In this limited time, a coherent exhibition had to be installed that would expose commonality and create a dialogue between the two different collections, yet would still allow an openness of conditions so that the visitor/reader would be able to traverse the display in their own way and to make their own connections.

As with all exhibitions, logistics around the objects and the space in which they are to be displayed play a large part in the decision-making around display. The extremely delicate nature of a number of the objects meant that they could not be truly navigated at all, but were displayed as static objects that denied the visitor the haptic interface usually associated with the book. Happily, some objects could be touched and used as books; indeed they actively required handling in order to explore their methodology and message. Other objects were not books as we commonly experience them at all, but book-related artworks in different forms. These were conceptual pieces, some of a highly political nature, with temporal qualities (usually experienced through page turning) here embodied and understood through the varying and openly exhibited processes of their making. Before the books were even unpacked, systems of good practice had to be formulated that would ensure the safe handling of the objects, and some background information on the objects had to be relayed and considered. It was late on Day One before the fascinatingly inaccessible packing cases were opened and the books from India were uncovered and laid out. For the group this was at the same time a contemplative act of revealing and an abrupt realisation of the task ahead.

The three days of installation were peppered with periods of notional inactivity, weariness and even boredom. But these lulls were actually active times of information processing (such times play an important part in all making projects) and they undoubtedly played a significant part in the successful, intelligent and articulate final installation of the show. The act of unpacking that was so physically experienced by the group could be viewed metaphorically as a critical part of the thinking through making process.