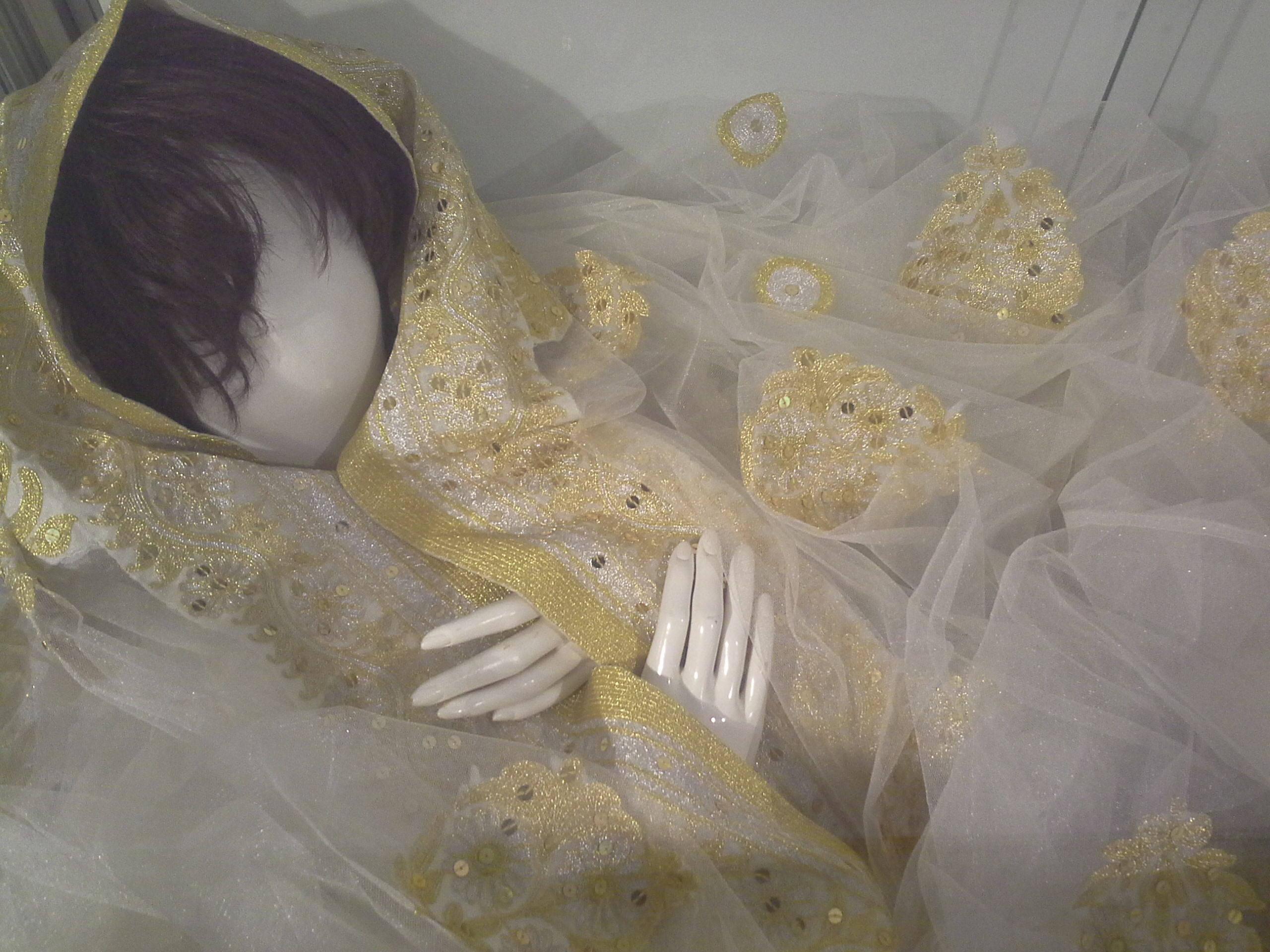 Najla Binhalail reflects on her work, Sleeping Bride, which was shown as part of the Practices of Research exhibition.

Most research workers engaged in the world of fashion often tend to display their clothing projects at galleries through the traditional method of using mannequins. Whatever the size and shape of the mannequins, the garments remain the same. My creation of “Sleeping Bride” was born at an unexpected moment of time – it was based on the materials that were available as well as on the place that was being offered to me at the L4 Gallery in Hartley Library (University of Southampton), as part of the Practices of Research exhibition, February 2014. My research subject is traditional bridal costumes in the Kingdom of Saudi Arabia (KSA) and their implications for contemporary fashion. From my perspective, “Sleeping Bride” offers a visual expression of the thousands of words of my thesis, which includes an exploration of the wedding tradition, bridal costume and culture of the KSA during the last century.

Some visitors told me how they came to have a visual understanding  of the meaning of my presentation before reading the text, which gave brief information about the practice of my research.“Sleeping Bride” expressed a deep meaning concerning the status of the bride in the culture of Saudi society, and elicited from the visitors a varied emotional response based on their previous impressions and background knowledge of the KSA.

In my opinion, as a Saudi Muslim woman and the creator of the display, the presence of the bride’s clothing in the small locked glass cases, allowing viewing but no touching, except by the owner of the display, mirrors the status of the bride as untouchable, except by her close family, and as a jewel to be protected and honoured in Saudi Islamic culture. The secret of the attraction and beauty of “Sleeping Bride” lies not in how much of her body appears on the surface, but in her modesty and how much is hidden beneath her clothing. This emphasizes her privacy, security, and stability. Further, in Islam, marriage is God’s chosen way of building humanity on earth; her sleep suggests and represents her big dream of settling down, being a wife and mother within the family, and thus fulfilling her life as a Muslim. “Sleeping Bride” also illuminates how women in the KSA were surrounded by the restrictions and traditions in which they believed and lived during the time expressed by the clothing on display.

I was amazed that my idea of the “Sleeping Bride” attracted such a large number of responses and lead some with whom I talked to appreciate and admire my views of the meaning underlying my presentation. This idea reveals a variety of views and different impressions, particularly for those who are specialists in the study of fashion theory, culture and design.

The art of looking for the genius, the thrill and excitement of the display, the mission of bringing to birth new ideas and emotions, the idea of delivering visually different impressions and multi-dimensional experiences, all these fulfil the purpose and aim of bringing about a visually and intellectually challenging exhibition for the visitors. There will, of course, be other points of view. Everyone who reads this article will have his or her own opinions, thoughts, and experiences. I welcome further comments on “Sleeping Bride” from any reader especially those whose views may differ from my own.