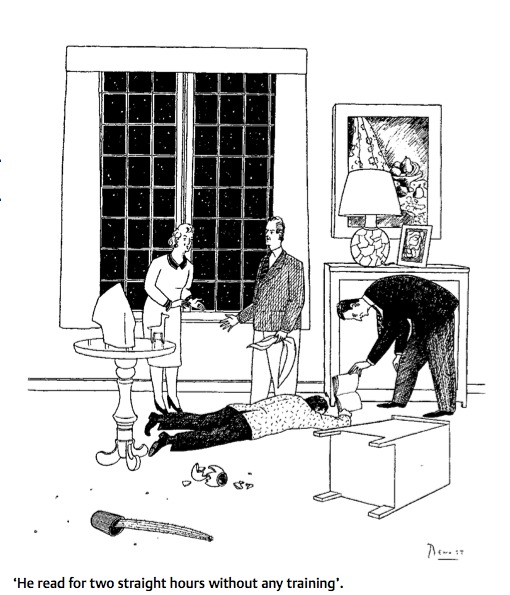 “He read for two hours straight without any training”

For the second session of The Seminar, we discussed two texts. Firstly, the opening chapter of Jonthan Culler’s neat little book Literary Theory: A Very Short Introduction (Routledge, 2000). Secondly, a chapter by Nicholas Davey called ‘Art and theoria’ from Thinking Through Art: Reflections on Art as Research (Routledge, 2006). This volume, edited by Katy Macleod and Lin Holdridge, brings together a wide range of voices to consider what we mean and think we mean by ‘practice-based research’.  Perhaps a little unfairly, I suggested at the start of the seminar the book is an example of what happens when a (seemingly) new concept comes into vogue (as for example with past terms like the cyborg, or visual culture). In that period when no one quite knows what to say about the new terms of reference, what better than to edit a book to draw out some answers? More often than not, however, the result is a further set questions and ambiguities.  Thinking Through Art results in something like this, not least with the concluding chapter by James Elkins’ taking a highly skeptical line about practice being in any way a form of research (you can read Elkins on this topic in more detail from the book Artists with PhDs, much of which is online; a second-edition of the print version is due out soon).

One member of the seminar group suggested that the piece by Jonathan Culler played the role of a guide to the reading by Nicholas Davey, whose chapter draws upon the more unwieldy vocabulary of Kant and Gadamer. We began with Culler then, whose chapter, albeit pointing towards literature, presents a neat, and at times funny account of the term ‘theory’.

In literary and cultural studies these days there is a lot of talk about theory – not theory of literature, mind you: just plain ‘theory’. To anyone outside the field, this usage must seem very odd. ‘Theory of what?’ you want to ask. It’s surprisingly hard to say. It is not the theory of anything in particular, nor a comprehensive theory of things in general. Sometimes theory seems less an account of anything than an activity – something you do or don’t do. You can be involved with theory; you can teach or study theory; you can hate theory or be afraid of it. None of this, though, helps much to understand what theory is. ( Jonathan Culler, p.1)

I think perhaps we went through all these possibilities, discussing the importance of theory in our own research, considering whether we were involved in theory development or applying theory to gain new insights. We also discussed the idea that maybe theory sometimes uses three words when it could just use the one – in other words that theory is unnecessarily opaque. However, for Culler, theory needs to be difficult. Theory signals ‘speculation’ he suggests, yet it is no mere guess-work:

…to count as a theory, not only must an explanation not be obvious; it should involved a certain complexity […] A theory must be more than a hypothesis: it can’t be obvious; it involves complex relations of a systematic kind among a number of factors;  and it is not easily confirmed or disproved. (Jonathan Culler, p.2-3)

The idea that theory should not state the obvious seems on the one hand obvious, yet equally raises the concern that somehow it overly complicates matters. However, as Culler suggests, theory can be defined by its ‘practical effects’, by the fact it can lead to changes in people’s views.  ‘The main effect of theory,’ he writes, ‘is the disputing of ‘common sense’: common- sense views about meaning, writing, literature, experience’. The fact that theory intervenes in common sense thinking is precisely why it cannot be obvious from the outset and it is the reason theory can be treated with suspicion, or see as a destabilising force. Arguably, this is also why theory has no fixed discipline from which  it operates . As part of the practical effects of theory it is also frequently the case that its significance moves across a range of subject areas. Culler gives two specific case-studies, one relating to the work of Michel Foucault and the other regarding  Jacques Derrida’s philosophical writings. During the seminar we discussed Foucault at some length. His ideas about the construction of knowledge/power and discursive regimes (along with his genealogical approach to history) has enabled a great deal of critical and theoretical work to take place across a number of different fields, including law, education, medicine, and management. It is certainly worth re-reading Culler’s brief account and/or reading other overviews to get a grasp of how ‘theory’ is less a set of constructs and much more a mode of enquiry – it is a process rather than a set theory of ‘something’.

The chapter by Nicholas Davey similarly develops this idea of ‘theory as process’, though he does so by tracing our modern conception of theory back to the Greek philosophical terms theoria (contemplation) and theoros (participation). ‘Unlike the modern conception of theory’, he writes, ‘ which stresses the detached observation of a phenomenal event, the ancient notion of theoria emphasises the act of witness which … contributes toward the emergence of the event participated in’. Crucially, Davey is seeking to reawaken the term theoria as a means to step outside of a forced dichotomy of theory/practice. He suggests the term ‘offers a dialogical account of how theory and practice can interact in such a way as to mutually assist in the realisation of an artwork’s subject matter’. He develops his argument in relation to three claims about art: (1) that art addresses us, (2) that it has distinct subject matters as its content, and (3) that the ‘interface between ourselves and art is fundamentally dialogical.’ In this model, the artwork does not possess an intrinsic ‘truth’ claim, but does have a claim upon us – at its simplist, the artwork demands it be considered an artwork, to which the viewer must respond, even if it is to deny it such status. Davey’s account is built upon a close reading of Gadamer’s hermeneutic philosophy, which in turn requires careful study to do justice to the arguments being laid out. In brief, however, the ‘site’ of the artwork in Davey’s account exists in a network of readings or meanings that circulate through language, culture and art processes. A theoretical, or virtual understanding and engagement in this network can both clarify and produce artworks, hence Davey’s belief that the divide between theory and practice is a false one. Theoria, as a practice of contemplation gets us closer to an understanding of how we approach art – as objects and as an activity. As he puts it, ‘the act of aesthetic contemplation is not the artwork but it is an act which facilitates the ‘working’ of the artwork, an act of aesthetic midwifery which allows the work to ‘work”.

As a group we seemed to reach the view that Davey’s account was arguing for something we generally wanted to agree with – i.e. that it is fruitful to get beyond the theory/practice divide and to think of practices of theory and theories of practice as combined and complementary processes. However, there remained some resistance to the terms of Davey’s argument, and even his notion of the artwork, which it was felt ends up a reified object. There is certainly a great deal more to discuss on this topic, and we will surely return to it. In fact, four members of our group, Jane Birkin, Rima Chahrour, Jason Kass, Nina Pancheva-Kirkova, are due to hold a group show at 5th Base Gallery (7-13 November, 2013), which aims to consider the nature of practice within visual arts research. The exhibition asks, for example, ‘if the production and exhibition of artwork becomes repositioned when considered as part of academic enquiry’. An artists’ talk will be held between 4-6pm on Thursday 7 November, to discuss many of the issues raised above, and the  event will be recorded in preparation for the writing of a collaborative article. I want to suggest the event takes the place of our classroom seminar for that week, and that as many of us as possible attend and contribute to the discussion. The talk will be followed by a private viewing and wine reception.