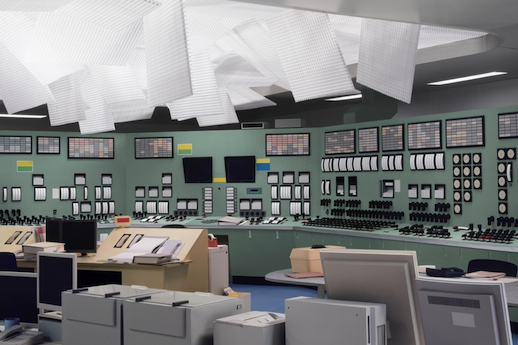 Japan’s tsunami of 2011, and the ensuing nuclear disaster at the Fukushima plant, has weighed heavily on the minds of everyone in the country – not least its artists. A radio documentary of Japan’s contemporary art scene evokes the figure of Godzilla to characterise a certain inventiveness in trauma and disaster:

Godzilla, the giant green lizard which levels Tokyo skyscrapers with a sweep of his enormous tail, was the response of Japan’s film makers in the 1950s to the national trauma of the atomic attacks on Hiroshima and Nagasaki. In the wake of 2011’s Tsunami, the nation’s artists have been similarly inventive in turning the disaster into art. The “post 3/11 movement” takes inspiration from the devastating images of flooded cities, smoking nuclear reactors and grief stricken victims which emerged after the earthquake and tsunami (In Godzilla’s Footsteps, BBC Radio 4)

The programme takes in the views of artists who showed work at the Art Tower Mito’s 2012 exhibition Artists and the Disaster – Documentation in Progress. Installation artist Tsubasa Kato volunteered to help in the clean up  Fukushima. Working with 300 local residents who had lost their homes, Kato constructed a three storey lighthouse from the rubble of ruined houses and schools, which now stands looking out over the sea. The controversial collective Chim Pom, on entering the Dai-ichi nuclear power plant in protective radioactive suits, held up referee red cards at the cracked dome of the nuclear reactor. While the video artist Kota Takeuchi actually took a job at the devastated nuclear plant. His video of a worker (presumed to be Takeuchi himself) pointing an accusing finger at the video camera (of a live feed by the plant company) gained a great deal of attention. He went on to hold press conferences to put pressure on Tepco, the operator of the plant. Another powerful work included in exhibition was Fuyuki Yamakawa’s ‘Atomic Guitar’. The installation uses radioactive soil taken from the the area of Fukushima and two Stratocaster guitars. Geiger counters transmit the radioactivity, which vibrates as an analogue signal, hitting the guitars physically and making them play. The ‘sound’ of the radiation (through the effect of the electric guitars) creates an haunting clang of guitar strings, at once ‘beautiful’ and disturbing.

Work exhibited at the Tokyo Wonder Site, an art organisation dedicated to creating and promoting new art and culture in the heart of the Tokyo, further demonstrates the significance of 3/11 to contemporary art. The current exhibition at the Shibuya venue, Identities in the World, introduces works of five artists from their Exchange Residency Program; with each having taken up the themes of ‘energy’ and ‘identity’ to express our dependence on the environment.  ‘After the 2011 Great East Japan Earthquake,’ the exhibition points out, ‘all of us in Japan were forced to recognize just how much our day-to-day lives are influenced by the electrical power supply. At the same time, there is a current which is much larger than the power of any individual’. Sutthirat Supaparinya’s exhibit, ’10 Places in Tokyo’, is particularly noteworthy. In her own words, she explains how the work, ‘pays attention to the relation between the use of nuclear as a means of electricity generation in Tokyo and its use as a weapon such as the atomic bomb in Hiroshima’. As a video piece, showing the location of specific sites from static camera points, it combines ‘the effects of the first use of nuclear as a weapon in 1945 in Hiroshima with the top ten places in Tokyo that used the most electricity in 2010’.

Of course, in geological terms, Japan is highly prone to natural disaster and subsequently the response of artists to such events has a specific national history. The Museum of Contemporary Art, Tokyo, has recently curated elements of its permanent collection to bring this history to the fore. Our Ninety Years 1923-2013 begins with the Great Kanto Earthquake and works through aspects of the World War, reconstruction and events leading to our present. The exhibition opens with the work of Takeshiro Kanokogi, whose large-scale painting, September 1, Taisho 12 (1923), provides a realist (if nightmare) scene of people exiting from a charred wasteland. The painting has always prompted debate due to the artist’s apparent clinical distance from his subjects, despite the shared devastation. The War period also prompts controversy, with numerous artists being drawn into the war effort,  pressured to produce works of a distinct realist and patriotic nature. Nonetheless, many artists, such as Tadashi Sugimata, worked secretly on surrealist-inspired paintings. The post-war period brings new difficulties and tensions for the artist community. Tatsuo Ikeda, as a former member of the Kamikaze squad, is troubled by the fading war memories, yet equally attacks the problems inherited by the postwar society. He produces ambiguous works of an unsettling nature.

Included alongside Ikeda’s work are also examples of American pop art, with a work by Lichtenstein and Wesselmann on show from the collection – so adding to a jarring sense of history. As the exhibition moves closer to the present there is an inevitable dilemma for artists who do not possess an experience of events as participants. A work by Oscar Oiwa, a Brazilian of Japanese descent, provides a more analytical account with a double work, ‘War and Peace’, with each panel depicting the same area of downtown Tokyo in war and peace time. The sense of distance from an event is taken to a further extreme in the work of Thomas Demand, who is known for using photographs of historical sites as disseminated through the media to construct full-size models, which he then photographs (so re-mediting the site of an event). On show was his work ‘Control Room’, which re-presents the control room of the Fukushima Daiichi power plant, which circulated globally as an image. As the curators note:

[Thomas Demand] utilizes the reality provided by a place that is the center of worldwide attention, but which is in such a critical state that it cannot be touched or even represented, and working from a distance through a chain of indirect contacts, he reaches out to it. He does this in a way that is more obvious than that of Takeshiro Kanokogi [whose work opens the exhibition], exploring the distance that is predestined to exist between expression and reality, in what must surely be described as a critical act. (Museum of Contemporary Art Toyko, Curator’s notes, 2013)