It is becoming clear that the the way people live their lives, including the way they inhabit buildings, makes a substantial difference to their energy use. Households of similar sizes and compositions living in homes of similar design and with similar infrastructures can have very different ways of living for all sorts of habitual, cultural and aesthetic reasons. This has implications for potential energy efficiency interventions and for the modelling of future energy demand. The same is true of non-domestic energy use where sensitivity to price (for example) is known to vary over time as contextual factors interplay. SERG’s research in this area concentrates on understanding and modelling behavioural aspects of energy use including potential rebound effects.

SERG’s Dr Tom Rushby gave a summary of the SAVE project to members of the University’s ‘Clean Carbon‘ USRG on the 10th May 2017. The event, which featured a keynote from Prof. Jon Gibbins, Director of the UK Carbon Capture and Storage Research Centre (UKCCSRC) on the state of CCS in the UK, consisted of […]

Research update: A Most Unusual Sunday

Author: Ben Anderson (b.anderson@soton.ac.uk, @dataknut) There is often talk in the media about the ‘spikes’ in energy demand caused by breaks in television schedules – when everyone is supposed to jump up and put the kettle on (or whatever). Although these make for good media stories, the largest overall surges are probably to do with […]

A further paper from the ESRC funded Census2022 project has just been published in the Computers, Environment and Urban Systems journal. Entitled “Electricity consumption and household characteristics: Implications for census-taking in a smart metered future”, the paper briefly reviews the nature of current and future census taking in the UK before outlining the household characteristics that are […]

Dr Ben Anderson of the Sustainable Energy Research Group (SERG) at the University of Southampton has been awarded a prestigious three year EU Global Fellowship under the Marie Skłodowska-Curie programme. The two year outgoing phase of the fellowship will be hosted by the University of Otago’s flagship Centre for Sustainability where Dr Anderson will be embedded in […]

SERG’s Dr Ben Anderson recently gave a summary of the ESRC funded Census2022 project results as part of a Market Research Society symposium on “Can Big Data replace the Census? What does Big Data give us now?“. Speaking alongside representatives from CACI, Telefonica and the Office for National Statistics, Ben outlined the potential value of electricity […] 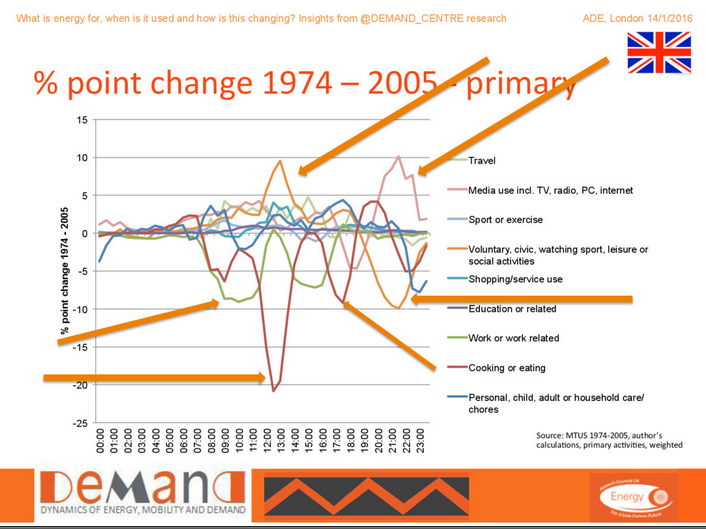 SERG’s contributions to the RCUK-EUED DEMAND centre were recently showcased at an event co-hosted by DEAMND and the Association for Decentralised Energy (ADE) on 14th January. Dr Ben Anderson gave three presentations covering: “Trends in the timing of energy using activities: what can be learnt from time use data?” – an overview of the use […]

SERG’s Dr Ben Anderson gave two papers at the recent Royal Statistical Society International Conference 2015 held at the Univesity of Exeter: “What can DECC’s NEED data tell us about levels and change in domestic electricity consumption?” gave an overview of some recent analysis of DECC’s domestic energy consumption dataset drawing implications for the need […]

Newing, Andy, Anderson, Ben, Bahaj, A.S. and James, P.A.B. (2015) The role of digital trace data in supporting the collection of population statistics – the case for smart metered electricity consumption data. Population Space and Place, 1-13. (doi:10.1002/psp.1972). Debates over the future of the UK’s traditional decadal census have led to the exploration of supplementary […]

SERG’s first report for the LCNF funded SAVE project has been published. The report,  “Report 2.1 – SAVE Customer Model Framework Specification“, lays out the applied research context for the SAVE Customer Modelling Framework (SCMF) and describes its key requirements. The report then outlines a microsimulation modelling approach than can meet these requirements and describes its conceptual foundations and method […]

The SAVE project’s review of evidence on ‘Energy Efficiency and Behaviour Change‘ which has just been published shows that whilst the great variety of previous trial approaches and contexts often makes it difficult to compare results, common insights have emerged. These include: Customers cannot be engaged as one group – the way in which different people react to attempts to change their […]