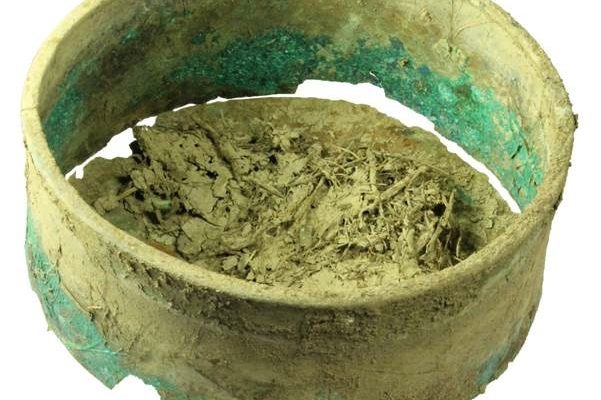 This February, Wiltshire Museum are displaying, for the first time, the archaeobotanical remains associated with a hoard of 8 Roman bronze vessels. The hoard was carefully buried, either to keep the bronze bowls safe or perhaps as a votive offering. The archaeobotanical investigations, undertaken by staff from Historic England and the University of Southampton, have revealed that the hoard was buried in the late summer period, with radiocarbon dating showing that the burial dates from the very earliest part of the post-Roman period, about 1,500 years ago.

This remarkable find of eight bronze vessels was made by metal detectorists in the Vale of Pewsey in 2014 who reported the find to Richard Henry, the Wiltshire Finds Liaison Officer for the Portable Antiquities Scheme. The bronze vessels had been removed from the ground by the detectorists, but crucially, they had not attempted to clean the bowls and the delicate remains of the packing material were preserved in place.

Finds Liaison Officer Richard Henry has led the exciting quest to discover more about the find. He brought in a team to excavate the site of the discovery, led by Dr David Roberts of Historic England and with the Assistant County Archaeologist, members of the Wiltshire Archaeology Field Group and the finders. Richard then brought in more experts, including Dr Ruth Pelling of Historic England and Dr Michael Grant of COARS, University of Southampton, who identified the plant remains and pollen. Dr Peter Marshall, also of Historic England, coordinated the radiocarbon dating of the flowers and undertook analysis of the results. The project has been led by the British Museum’s Portable Antiquities Scheme and supported by Historic England, Southampton University, the Association for Roman Archaeology and Wiltshire Museum.

Museum Director, David Dawson, said “Richard Henry has led this remarkable partnership project, drawing specialists from across the country to piece together the fascinating story of the burial of Roman bronze cauldrons that took place on a summer’s day 1,500 years ago. We are thrilled to be able to display this important material”.

Richard Henry said “Such discoveries should be left in situ to allow full archaeological study of the find and its context. The finders did not clean or disturb the vessels which has allowed us to undertake detailed further research. If the vessels had been cleaned none of this research would have been possible”

Ruth Pelling commented that “It has been an absolute pleasure to examine this unique assemblage. By combining the plant macro and pollen evidence we have been able to identify the time of year the vessels were buried, the packing material used, the nature of the surrounding vegetation and the likely date of burial.”

The finders generously donated the plant remains to the Wiltshire Museum to allow the detailed research to take place. The bronze vessels do not meet the criteria of the Treasure Act 1996 and have been retained by the finders. A selection of flowers are on display at the Wiltshire Museum, Devizes from 8 February.

Ruth Pelling and Stacey Adams will be talking about their research on the flowers along with other recent Wiltshire discoveries at the Archaeology in Wiltshire Conference on 1 April in Devizes. Their talk is titled “Bake Off and Brewing in Roman and Early Saxon Wiltshire: recent archaeobotanical finds’. Further details of the finds and their study also feature in the March-April 2017 edition of British Archaeology.

• Thousands of archaeological objects are discovered every year, many by members of the public, particularly by people while metal-detecting. If recorded, these finds have great potential to transform archaeological knowledge, helping archaeologists understand when, where and how people lived in the past.

• The Portable Antiquities Scheme www.finds.org.uk offers the only proactive mechanism for recording such finds, which are made publicly available on its online database. This data is an important educational and research resource that can be used by anyone interested in learning more.

• Wiltshire Museum is home to the best Bronze Age archaeology collection in Britain, The collections are Designated by Government as being of National Significance

• Wiltshire Museum is an independent charity, with some revenue funding from Wiltshire Council and Devizes Town Council.

• The Museum is run by the Wiltshire Archaeological and Natural History Society (WANHS), a registered charity founded in 1853.

• Our mission statement is ‘Inspiring people to explore the archaeology, history and environment of Wiltshire’.