Researcher Steve Hicks felt an earthquake on last Saturday when in Swansea and describes here his experience:

Visiting family in Bristol on Saturday, at around 2.30 pm, I started to notice the structure of my partner’s parents’ house move slightly backwards and forwards for a few seconds. I initially thought that it was the washing machine on its fast spin cycle. I then thought – “Maybe that was an earthquake…”. I went to check the live seismograms from the British Geological Survey, one of the nearest stations is located close to Swindon, and the signal on the seismogram trace was obvious – it was definitely an earthquake! Interestingly, there were four people in the house at the time but only two felt it. The two who felt it were sitting down; the other two were standing up. I then checked Twitter and many people in South Wales and Southwest England experienced the same shaking as I did. 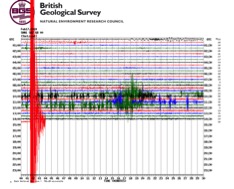 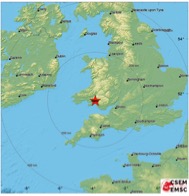 Location of the Swansea earthquake

The faulting mechanism of the earthquake (shown by the “beach ball” below) indicates a “strike-slip” type of faulting, in which blocks of ground on either side of the fault moved horizontally with respect to each other during the earthquake. Although the beach ball tells us about block motion, we cannot determine the exact orientation of the fault: the fault is aligned in either a northeast-southwest or northwest-southeast direction. Therefore, we need other geological/geophysical evidence to find the fault orientation. We can use satellite data (e.g. InSAR), but there will be no detectable signal for such a small quake. We can map cracks or ruptures at the surface caused by the earthquake, but Saturday’s earthquake was too small and deep for any surface ruptures. Another option is to map the pattern of aftershocks following the earthquake as these should line up along the ruptured fault. However, with the likely small number of detectable aftershocks and the relatively low density of seismic stations in the UK compared to the scale of the fault, aftershock distributions will likely look “fuzzy”.

“Beach ball” showing the focal mechanism of the Swansea earthquake.

An alternative option is looking at geological maps of the area to find where faults appear at the surface. They could represent the pattern of deeper faults in the crust – particularly at 7 km (4 miles) depth where the earthquake occurred. The overlap of the location and mechanism of Saturday’s earthquake on a geological map (below) shows that the earthquake lies quite close to the Swansea Valley Fault Zone (“SVFZ” on the map), and that the faulting style is consistent with the sense of slip mapped along the fault (“left-lateral”). 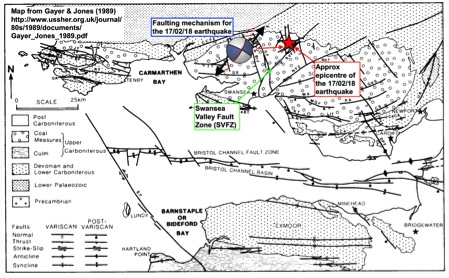 Geological map of Southwest England and South Wales showing the main fault structures in the region. The 2018 Swansea earthquake epicentre is given by the red star.

Details of the Swansea Valley Fault Zone are hazy, but one research paper indicates that the fault has been active since the Devonian geological period so this fault may be over 350 million years old. The Swansea Valley Fault was probably altered quite considerably and reactivated by the Variscan phase of mountain building, which resulted in Himalayan-sized peaks, beginning approximately 290 million years ago. But the fault could have even preceded the Variscan Mountains – if associated with the Midlands Microcraton, it could be as old as the Precambrian period (over 540 million years ago).

Regardless of the fault’s complex history, the slow transfer of stress today from the active tectonic areas of the Mediterranean to the south, and from the mid-Atlantic ridge to the West probably contributed to the re-activation of the fault during Saturday’s relatively small earthquake beneath Swansea.