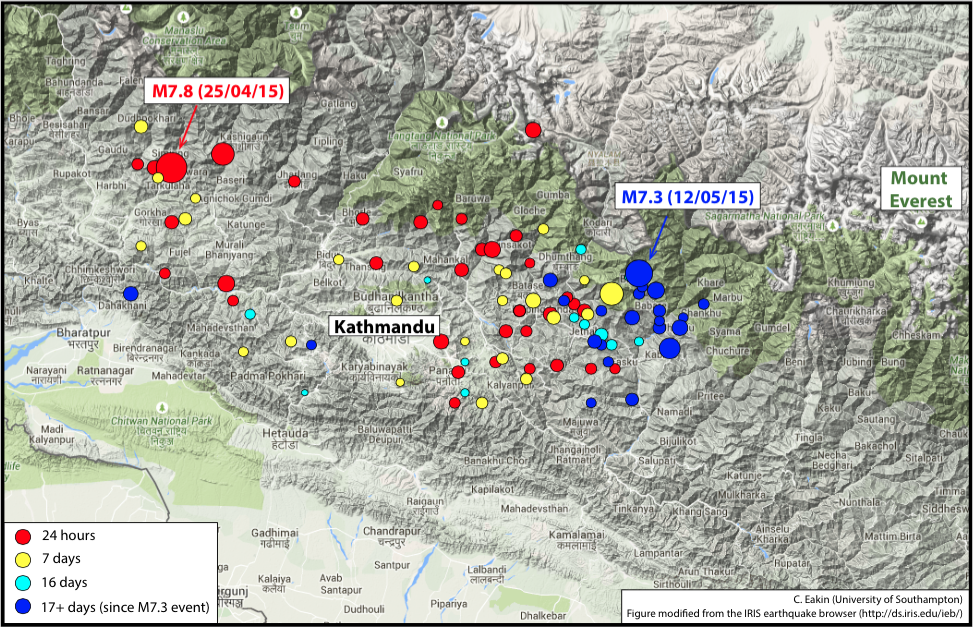 On Tuesday the G&G group gathered to discuss the recent M7.8 earthquake in Nepal. That same morning, a few hours before the seminar, another devastating magnitude 7.3 earthquake shook the same region. Since the main M7.8 event on 25th April there have been 100’s of smaller aftershocks. These typically decrease in size and frequency over the days and months following the main event, but the latest M7.3 quake has substantially increased the level of seismic activity in the region once again. For example, for the week ahead there is an 80% chance of at least one magnitude 5 to 6 aftershock occurring.

The epicentre of the main M7.8 event has been widely reported as 77km northwest of Kathmandu, the capital of Nepal. Earthquakes of this size however are better represented by rupture over a large area rather than at a specific point. The extent of the fault that has slipped is perhaps best delineated by the distribution of the aftershocks as the ground re-adjusts to its new position. The map of aftershocks above indicates that an area roughly 150km x 70km has slipped. This fault patch is directly beneath Kathmandu and the city is surrounded by the aftershocks. Models of the slip evolution along the fault plane during the M7.8 event also suggest peak slip greater than 5m and that the rupture propagated from west to east heading towards Kathmandu. A similar pattern is also seen in the aftershock distribution, with aftershocks appearing to cluster eastward both in space and over time. Overall this suggests a transfer of stress towards the east, which likely triggered the secondary M7.3 event on a smaller patch of fault that was still stuck.

In the future, Nepal and the surrounding regions along the Himilayan front can expect similar if not larger earthquakes to occur. A huge stretch of the plate boundary immediately to the west of the M7.8 origin last ruptured over 500 years ago (green band in the figure below). In addition a characteristic chain of events in 1255, 1344, and 1505 moving from east to west, appears to be recurring in 1934, and now in 2015. If history has a habit of repeating itself, as it oftern does, then the next seismic gap on the other side of Kathmandu is likely to pop in the coming decades.