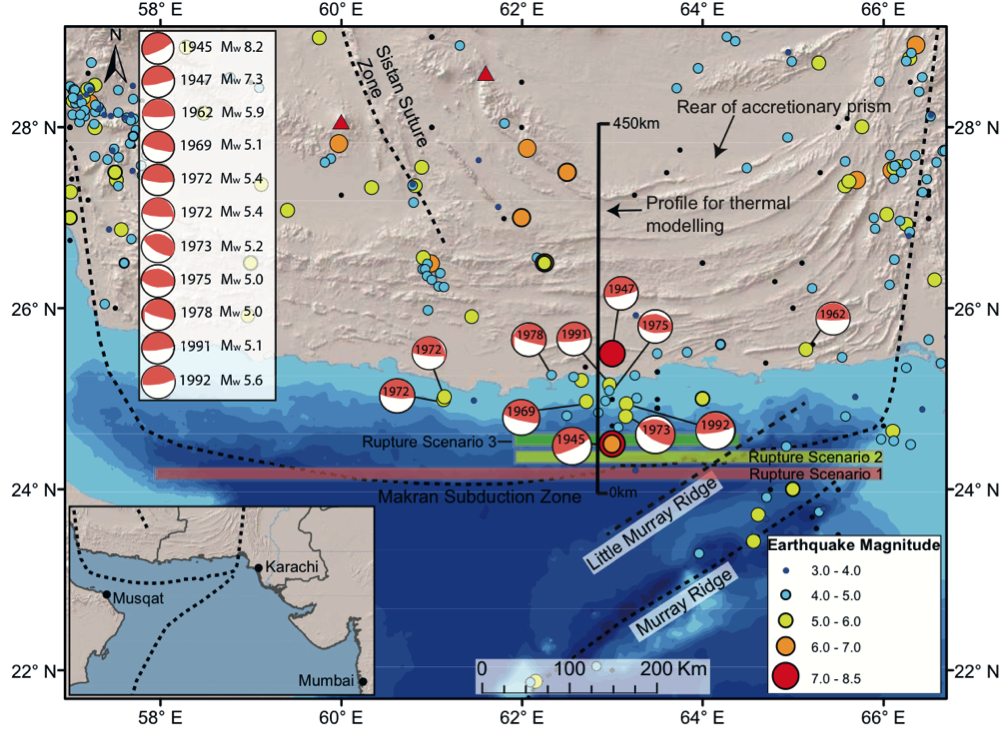 Former Southampton PhD student Gemma Smith and Lisa McNeill, Tim Henstock and Jon Bull have been studying a poorly understood subduction zone in the western Indian Ocean – the Makran, offshore southern Iran and Pakistan. At a subduction zone, one plate slides beneath another creating compressional deformation. The resulting major fault zone generates the largest earthquakes on Earth often with devastating tsunami waves that not only impact local populations but can also travel across wide ocean basins to impact coastal populations many thousands of km’s away. In the last 10 years, the 2004 Boxing Day Earthquake and Tsunami (offshore Indonesian Sumatra to the Indian Andaman Islands) and the 2011 Tohoku-oki earthquake in the Japan Trench, showed the impact of such earthquakes and resultant tsunami. Before these earthquakes, the Makran had not really been highlighted as a major hazard – earthquakes are fairly infrequent (although there had been a magnitude 8 tsunamigenic earthquake in 1945 and several magnitude 7 earthquakes since), and many scientists felt the Makran’s style of deformation indicated that the fault zone was weak and therefore less likely to generate large earthquakes. But the Southampton researchers, with colleagues from the Pacific Geoscience Centre Canada, analysed the thermal structure of the margin to find that the very thick sediments entering the subduction zone (originating from the high Himalayas and transported into the Indian Ocean by the Indus River) might reach high temperatures that lead to changes in the chemistry of the sediments, making them more likely to generate a strong fault zone. This analysis, published in the journal Geophysical Research Letters in 2013, suggested that the potential earthquake rupture zone on the margin could be very large and the earthquake could be over magnitude 9 (similar to the earthquakes in 2004 and 2011). The publication attracted a lot of attention from scientists working in Iran, Pakistan and Oman, many looking for geological evidence for past earthquakes and tsunamis generated by the subduction zone. Both local and international scientists are now realising that this subduction zone could pose a serious hazard for the western Indian Ocean. As a result, Lisa and Gemma have been communicating about future research with new colleagues in the region and have been invited to participate in conferences close to the margin, including the International Conference on Seismology and Earthquake Engineering in Tehran, Iran in May and a Regional conference on Reducing Tsunami Risk in the Western Indian Ocean in Muscat, Oman in March. News from the meetings will be reported here on the blog.

Follow this link to Gemma, Lisa and colleagues paper in Geophysical Research Letters:

Link to blog article with contributions from Gemma on how the British Library are working on digitising historical records to investigate past earthquakes and tsunami in the Makran region.