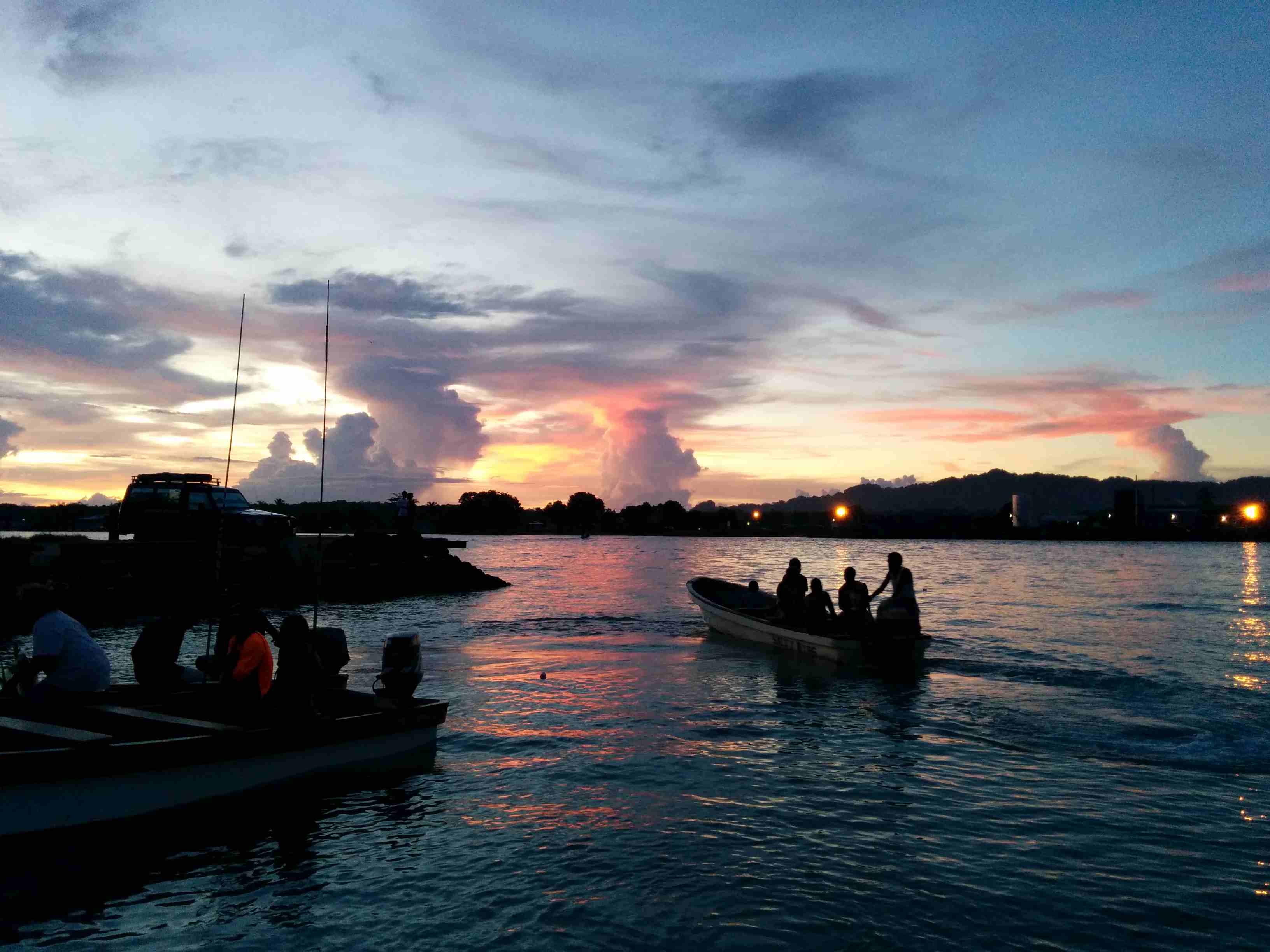 As part of a collaborative project with colleagues at JAMSTEC (Dr. Daisuke Suetsugu), University of Tokyo (Prof. Hajime Shiobara), University of Southampton (Dr. Nick Harmon, Dr. Catherine Rychert, and Dr. Derek Keir), University of Rhode Island (Prof. Yang Shen and Prof. Brian Savage) and Stanford University (Prof. Jesse Lawrence), we are deploying seismometers across Papua New Guinea (PNG) and on the seafloor of the Ontong Java Plateau (OJP). Our goal is to study the deep structure of a large igneous province and its interaction and reversal of subduction beneath PNG. This blog chronicles the land deployment carried out by the University of Southampton team of Nicholas Harmon and Saikiran Tharimena.

We tried to keep it short but this blog turned out to be a pretty long one – I’ll post these in three parts. Thanks to Nick for writing almost the entire blog and I took most of the pictures during the trip. Hope you all enjoy reading about seismic deployment!

After months of preparations, we arrived in Port Moresby after nearly 24 hours of travel on 16 November 2014. We got a little sleep on the plane but a little too excited about the next three weeks of deploying seismometers! We were excited to see a new country, meet new people and do science! The first thing we did was to go on a walk trying to find a store to buy a sim card but were laughed at by the hotel security when we told them our intention to walk to the nearest mall! Apparently it was too far away and we managed to pick one up at a petrol station.

Nov 17, 2014: Our local contact Ronald Verave picked us up in the morning at the hotel. He’s a geophysicist for the Mineral Resources Authority of Papua New Guinea, which is charged with overseeing mining activities, geologic surveying and water resources in the country. Ron is a very congenial person, with an easy laugh and a good sense of humor, and has helped out on the previous passive source experiments in Papua New Guinea.

We set off to do some shopping for consumables while the test ran. We had a very tight schedule for the deployments. After a lunch stop, we drive by a man selling lobsters in 37 C heat on a street corner! Ron sees the lobsters and mentions how tasty lobsters are and how they are one of his favourite foods. My response is that those hot street corner lobsters are a sure fire way to gastro intestinal distress. I think this is going to set up a running gag for the trip and the impetus to eat lobster whenever possible. We are all set to begin the deployment! Yaaaay!!

Welcome to the Autonomous Region of Bougainville!

Nov 18, 2014: We took the early morning flight to Buka, the interim provincial capital of the Autonomous Region of Bougainville. Ron had liaised with Franklin Lasey of the Bougainville Disaster Management Office. The office has recently been created by the Autonomous Region of Bougainville to plan and react during natural disasters such as earthquakes and tsunamis. At present there are no seismic stations in Bougainville for earthquake monitoring and the seismic hazard in the region is coarsely known. We deployed the first seismometers in the Autonomous Region. Franklin is very excited about our deployment and has helped immensely with arranging logistics, personnel and secure locations for the seismometers. I’m looking forward to working with him to evaluate the seismic hazard in Bougainville and towards a larger goal of establishing a national network for real time monitoring.

After a little running around town looking for station consumables, a very heavy rainstorm, mud, and a drive up to the Disaster Office, we get down to business.  We dig a 1 m deep hole (which turned out to be a little deeper!) for the seismometer to be placed in; we put a slab into the base of the pit and couple it to the soil as best as possible, and place a bucket around the slab, and backfill around the bucket to keep the dirt from collapsing onto the seismometer. We then orient the seismometer to north and level it. We connect it up to the power and serial port of the computer and set it running. When we are confident that the sensor is making sensible recordings we seal up the bucket and bury it.  After a few hours our first deployment is finished – we head to our hosts at Reason’s Lodge for the night.

Nov 19, 2014: Buka is an island that is separated from Bougainville Island (affectionately known as big Buka, by people in Buka) by ~400 m of water, the Buka Straight. It has a very fast moving current going through it. From our room at Reasons Lodge we could see the dingies with 40 Hp outboard motors going flat out just barely crawling against the current. Although I am calmed by looking down from our balcony into the straight below-I can see tropical fish, coral and anemonies! Should be fun going across it with our seismometers…. After that I’m told we have a 3-4 hour drive on fairly rustic roads to Arawa.

Crossing the Buka Straight went fine-until the motor cut out. We were dead in the water for ~5 mins while our captain frantically tried to get the engine restarted. I asked Sai to only take pictures of the scenery so as to not document any Health and Safety Infractions that may or may not have existed with our transport! Fortunately, the engine restarted and we got to the other side. Our driver met us on the otherside and we got loaded up and set off. Our driver was very good and got us to Arawa quickly-2.5 hours, only a few stops to pick up the occasional package to be delivered and a little betel nut to “fuel” the driver.

Our first stop was the Rising Sun Inn, where our hostess informed us that we should speak to the head of the local council, Ms. Lucy Travertz. We drove over to the temporary headquarters for the region and met with Lucy. It was a busy day, as she had just come from a meeting about the reopening of some essential services in the region, such as the airport at Kieta/Arawa and a new Administration Complex in Kieta. It looked like a lot of this was happening in the very near future. She kindly took the time to help us sort out a secure place for out next station in the yard of the Arawa Police station – should be pretty secure there! Thanks to Sgt. Belingka for permission.

Nov 20, 2014: It was a 6 am start for the drive to Buin at the end of Bougainville Island. Another 2-3 hour drive, over similarly bumpy roads – Sai and Ron were getting bounced and jostled quite a bit, but taking it in good humor. We make a stop at a local high point along the way. Our driver points out Buin in the distance, and further offshore the Solomon Islands (Choisel Island). Hope to get permission to deploy there soon.

The police have called ahead and arranged for us to deploy in the Buin police station. With permission from Sgt. Popui and with a little local help we get the station in and take a long ride back to Buka for tomorrow’s flight.

Talking to the people of Bougainville has been pretty eye opening. There are many needs here, but everyone I spoke to had experienced a “guria” or earthquake and all were supportive of our activities here. I see why Franklin was so enthusiastic. Our work sets a precedent that Franklin and the MRA can build on and connections to help move forward. I hope I can help.

As a seismologist, I understand the physics of an earthquake, and the damage it can directly or indirectly cause. In my geohazards course to students half a world away, I try to instill the tragic consequences of the have and have nots of seismic hazard mitigation caused by socio-economics, where risks are much higher in developing countries. Talking to people here living on two active subduction zones, my perspective becomes less academic.

Nov 21, 2014: Back in Port Moresby – a bit of running around to do, more supplies to pick up. Sai had to solder connectors onto the power cable for the Guralp 3T instruments before we head off to Kavieng. But otherwise we should be ready to go!!

This brings us to the end of part 1 of our awesome scientific trip to Papua New Guinea. More interesting islands to cover in the next part of the blog!!