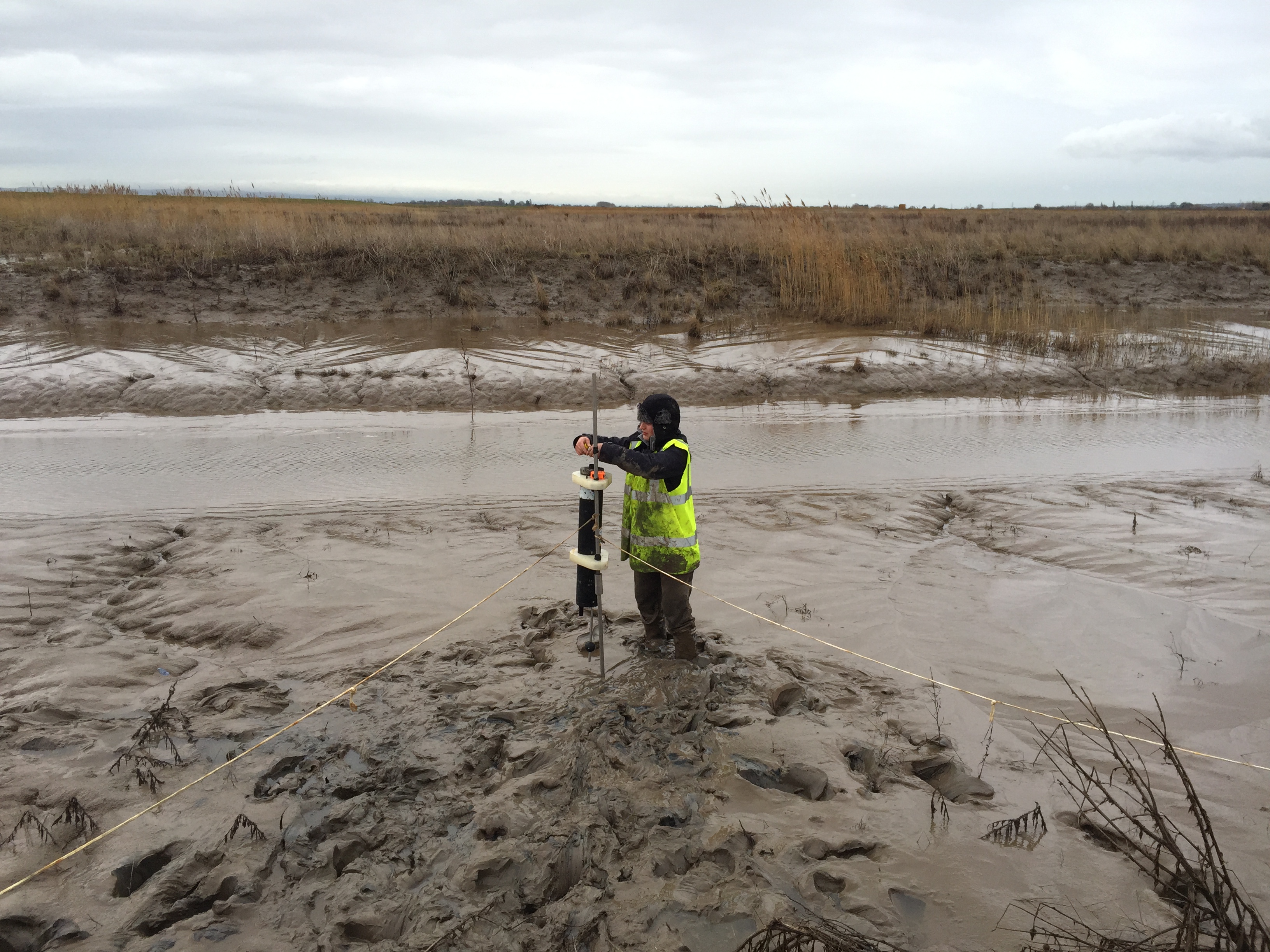 Managed Realignment (MR), the process of deliberately removing flood defences to restore intertidal habitats, is undertaken to compensate for coastal developments such as ports, but also as a mean of improving flood defences. Such schemes are becoming increasingly popular, and are expected to increase eight-fold in 15 years to meet the UK’s National Adaptation Programme. As part of my PhD at the NOC Southampton I am monitoring the morphological evolution of the artificial creeks network dug in the Steart MR project, the largest scheme undertaken in Europe to date with an area of 440 hectares.

Since the first fieldwork campaign, undertaken in September 2014 right after the breach of the old defences, surveys have been done every two months to observe the morphological and sedimentological evolution of the site. The February survey is unique because of the extreme tidal event that occurred on the 21st of February: the highest tide of the 18,6 year nodal cycle, with a tidal height of 13.0 m recorded at Hinkley Point. This was an opportunity to observe the immediate response of the site to an extreme event and check its efficiency as a flood defence.

The morphology of the creek is monitored with a RTK-GPS. The rapid sedimentation (since September 2014 the creek has been infilled up to the lower banks) is monitored with stakes in the ground, bimonthly sediment sampling with syringe cores and cohesive strength measurement undertaken using a CSM. Finally the water level has been monitored since December 2014 at the mouth of the creek with a Pressure Transducer.

To capture the extreme tidal event we deployed an integrated Valeport unit, fixed to a pole in the lower bank halfway across the creek. This instrument measures the horizontal current velocity, water elevation and turbidity, and records data every 15 minutes for 8,5 minutes, as close to continuous recording as we can get. The Valeport was left over the week-end to record the February 21st tide, and taken away on Monday 23rd.

Data recording on site. Left: recording data from a Pressure Transducer left at the mouth of the creek since December 2014. Right: recovering data from Valeport left over the week-end.

According to the Wildfowl and Wetlands Trust (site managers Alys Laver and Tim McGrath), the new flood defences were sufficiently high to contain the extreme tidal event, and no negative impact for the wildlife was observed. Since all of the deployed equipment survived their stay in the creek, valuable high resolution hydrodynamic data covering the tidal event were collected during our fieldwork. Hydrodynamic and sedimentological data will help us define processes taking place in the MR scheme creeks network, such as water volume exchanges and sediment transport. Such processes, tightly linked to the creek’s drainage and nutrient transport functions, play an important role in the development of a stable intertidal habitat.

Another major tidal event is expected for September 2015: a longer field survey should be undertaken to monitor the reaction of the site over several creeks, in order to have a better representation of the entire network.