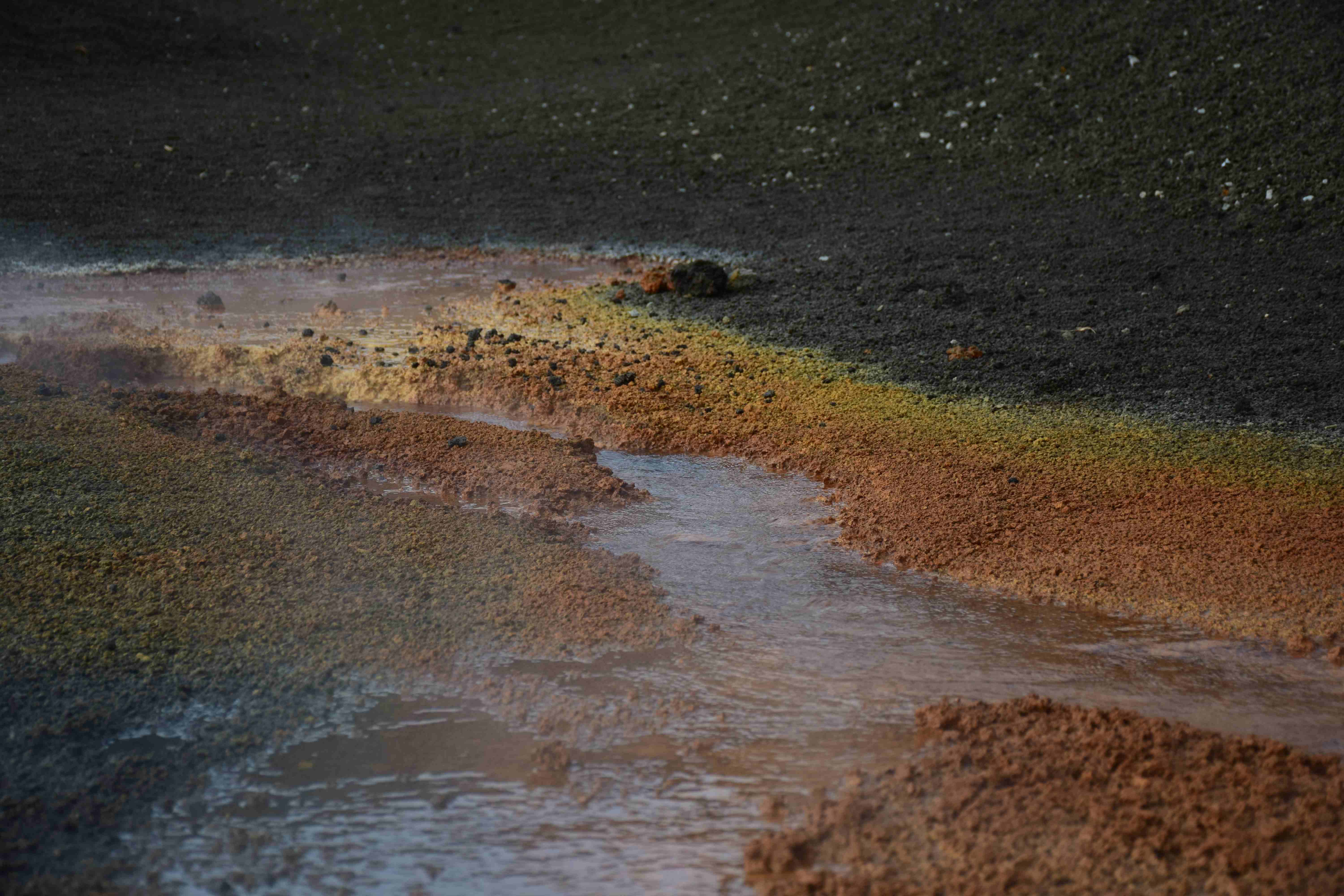 After successful deployments in the Autonomous Region of Bougainville and the New Ireland Province we head off to the New Britain Province and the Kiriwina Island.

Nov 28, 2014: We catch a flight from Lihir to Rabaul, transiting to Kimbe for another deployment. We had a one night lay over here – so we did some shameless sightseeing. Rabaul is famous for two things, volcanic eruptions and Japanese invasions – probably sets the tone for the day’s cataclysmic landscape – as there was ashfall here as recently as August!  By way of a brief history lesson Rabaul served as Admiral Yamamoto’s centre of command in the second half of the war and the area was heavily fortified – the remains of which can still be seen today as well as many war relics (tanks, planes, barges). We checked out a Japanese tunnel that still houses some of the rusting barges the Japanese used to ferry supplies and troops around the region. Apparently some of the tunnels, dug by POW slave labor extend some 200 m into the mountain side. Our next stop was Admiral Yamamoto’s command bunker. One particularly interesting room (in what otherwise looked like a concrete basement) was the “command room” which has several maps of Rabaul for strategic planning purposes. From driving around, we can see that these remnants of Japanese occupation over 70 years ago litter the hills and spaces around town and stands as a reminder of the problems of a global war. When you think about it, the generations that survived the world wars is nearly gone,  but looking at the level of violence in the world today, its still not clear the current generations fully appreciate the painful lessons learned from the two world wars.

Driving on to things more geological, we continued down to where Rabaul town once stood. The landscape shifts from being lush green and tropical to barren and dark brown. We are driving over this brown landscape for a good 20 minutes and its not until I get out of the car that I realize that the ground is littered with pebble sized pieces of pumice! We’ve arrived at our destination, hot springs – again Ron’s idea of a good time from a geothermal perspective.  We walk over to where water is bubbling and steaming out of the ground. The pumice in the water is stained with rust and is literally boiling hot. Enterprising locals were trying to sell us eggs to boil in the hot water and tell us that the pumice on the ground is from the recent ashfall in August. In the background we can see fumerols rising from the recently active volcano ~800 m across the water. It’s a pretty surreal sight, and as we’re driving out we see more and more rooftops peaking out from under the ash. Rabaul used to be a big commercial hub because of its harbour, but the town is basically dead now, as the population and trade shifted to the nearby town of Kokopo. Again I am blown away by the scale of the damage by the “little” ashfalll from August.

Nov 29, 2014: Morning flight to Kimbe, Victor Nereve , president of Tallea (Kimbe) ishelped us with logistics. Oddly enough, in Papua New Guinea, on a Saturday it is hard to buy things like car batteries. Victor, who also conveniently owns a garage has agreed to find a battery for us and allowed us to put our instrument in his large backyard. We meet up with Victor and his treasurer Brown, who greet us congenially and help us find a specific location for our instrument. Then he’s off again to enjoy his Saturday afternoon. The job gets finished and our 7th station is deployed! One more to go! We find Victor and thank him again and bid him farewell for another 6 months. We head to the Liamo Reef Resort hotel and celebrated a job nearly done. We flew back to Port Moresby the next day, did a little reorganization, shipped a car battery to our next stop Kiriwina Island, and some shopping for a few consumables (duct tape!) and the head out again on Tuesday.

Dec 2, 2014: We catch the morning flight to Losuia Airport, Kiriwina Island, to deploy our final station in Papua New Guinea. I’m a little worried about this deployment. We don’t have any contacts on the Island, other than the hotel we are staying at, and there is very little in the way of stores, so if we are missing any supplies we may be totally out of luck.

Kiriwina is located in the middle of the Woodlark Basin, and is a low lying coral island. We land on a dirt landing strip with no landing lights. I am told later on that this is literally a world war II landing strip built by the allies to bomb the base and shipping coming in and out of Rabaul.  Not much is visible from the air. We are met at the Airport by the people from the Butia lodge – Dollar, the driver, Gum – the tour manager and Kennett Kalubala – the lodge manager. We collect our stuff, the battery we shipped from Port Moresby to be on our flight from Airlines PNG didn’t make it on the plane. This was potentially a giant problem as there was no autoparts store on the island – batteries are usually shipped in from nearby Alotau, but there are only 3 flights a week!! This added a complication to the deployment (I was stressed to use understatement).

Gum, Dollar and Ken have a few ideas of where to get the battery, and Ken offers to host the seismic station, as the Lodge has a lot of land that can be used and people to watch over the equipment. Ken just had to check with his sister, Sarah Clark who lives in Cairns. It’s a matrilineal society, so the land passed to Ken’s sister.

After lunch we took a ride over to Ken’s village to talk to his nephew David, who got a new battery a few weeks ago. He’s currently using the battery to power a starting motor on one of the three 3 wheeled motorcycles on the island (I’m told and later observe all three, 1 blue and 2 red…). He uses the trike to haul wood and other goods around the island to make money. We explained to David why we need the battery, and he agreed its for a good cause, and promised to bring it around to the lodge after dark when he’s finished delivering some wood. We offered the new battery that we had shipped from Port Moresby as a replacement for the one we borrowed. Very kind of him to inconvenience himself for the sake of science! Our problem is solved, we head back to the lodge – Gum agrees to show us one of the local swimming holes – a limestone cave that is filled with fresh water. sounds like a great way to end a hot and stressful day.

Dec 3, 2014: We were up early to beat the heat. Mrs. Clark thought it was for a good cause and gave us permission to put the seismometer on the grounds of the Butia Lodge. We get the deployment done and the GPS was acting up!! This was one of the latest Guralp 3T’s – we had to figure out how to get it to settle down and consistently correct the timing of the instrument. We did not have appropriate spares as this was one of the latest Guralp 3T’s we had! Gum got us fresh coconuts from his farm and we took a break. After drinking 3 whole coconuts and eating all of the coconut flesh, Sai applied all of his brainpower and figured out how to reset the GPS manually and by the end of the afternoon all is working smoothly. Well done Sai! Our last deployment is finished! At dinner Ken talks about his greatest fear for the Island is a tsunami – because the island is so low lying, there’s no place for the people to go if there is a large one nearby. We talked a little bit about the mechanics of tsunami with him and some basics for what to do. He’s very supportive of our work.

Dec. 4, 2014: We had a morning to kill, so we take a drive around the island. Many people here live like their ancestors did almost a century ago – with the exception of cellphones and t-shirts. The cheiftan system is still in force here, and their word is law! People live in huts woven from palm fronds, with the occasional piece of corrugated steel to make a roof or wall for some. Villages are lit by candles and cooking fires, and people subsist off the taro, banana, coconuts and fish that grow plentifully around the island. When I pay the bill for our lodging, Ken tells me that the payment is a significant influx of cash for the island and that he’ll be able to pay two weeks salary for his entire staff. The contrast to our lives in the UK is stark and puts a lot of things in perspective.

Dec 5, 2014: I’m ready to head home to see my wife and family, I’ll be back in 6 months to service the stations and on another adventure.  I’ve learned and seen a lot about Papua New Guinea, and I hope that by doing science here I can help the country in some small way. There is a lot of resource here both in the ground and in the people and the optimism and pride the people have in Papua New Guinea is well founded. I think we’ll see a lot of big and exciting things happening here in the next few years.