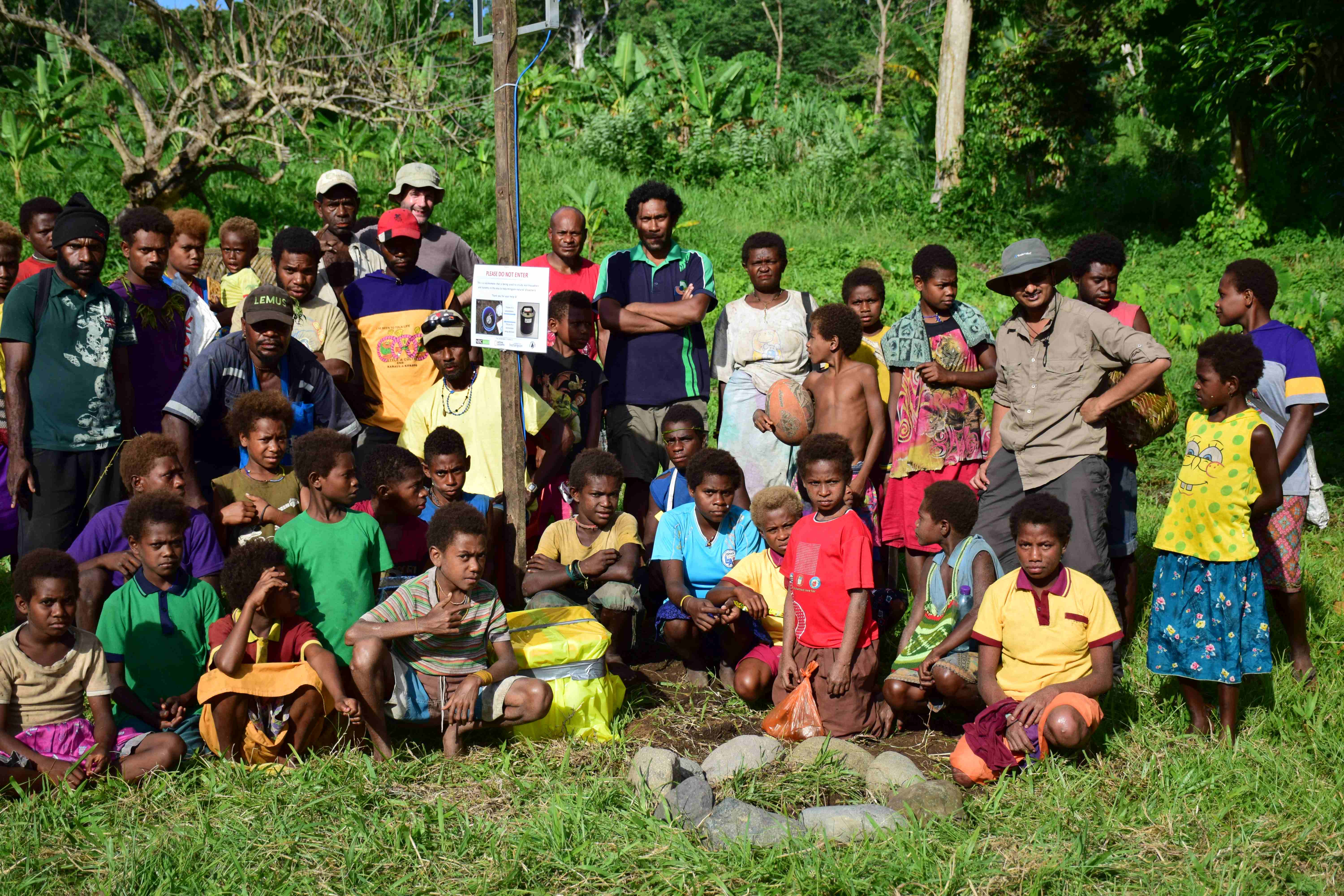 Nov 22, 2014: We arrived in Kavieng, New Ireland. We were welcomed with a complete cell phone network down! We couldn’t call our local contact Paul Noibano, who works for the Minister of Mines. We frantically tried to contact Paul and even planned to search for him in the town as he had the most important component – car batteries to run our seismometers! We head to the hotel, the Kavieng Beach Resort and wait for the cell towers to come back to life. In the mean time Sai set up the Guralp 3T to do a quick huddle test, overlooking the beach behind the hotel. Hey, seismometers need fun in the sun too!! Think about taking pictures of the seismometers on the beach with sunglasses….

We didn’t have the battery so Sai tried to run it on Solar Power but the Guralp 3T turned out to be a power hungry beast! Since the cell towers were still down, we decided to use the battery from a Toyota Landcruiser that we rented for testing! Cell phones turned on late in the afternoon and Paul stops by the hotel. He’s got our all-important batteries and arranged for us to put the seismometer in his village, just outside of town. He took us over to meet his brother-in-law Bernard who is the landowner. Bernard was super helpful and got a couple of is friends to clear out a place for the seismometer. We returned the next morning to deploy the seismometer. The batteries we had were a little too flat for the seismometer to work properly. We canvassed the town looking for a place that will sell us a battery on a Sunday – fortunately the local supermarket is open and the owner has an auto parts store next door and was willing to sell us one. With the bigger battery the sensor is off and running.

Nov 24, 2014: We drove from Kavieng in the northwest of New Ireland to Lasu, a remote location in the southeast, approximately 250 miles along the Boluminski Highway. It is a sealed road for about two thirds of the way to Namatanai and then becomes dirt road for the rest of the way. We were debating whether to stop in Namatanai for the night and do an early drive to Lasu or to drive straight through. We ended up driving straight through – after about a 10 hour journey we arrived at the village just before dusk. We stopped at the village to speak to the village “Bossman” or elder, the people who greeted us offered fresh coconut that they were hacking off a nearby tree (their son scrambled up the 10 m tree as if he were walking up stairs to cut them down). The Bossman suggested the local elementary school as a safe place to put the station. So we drove a couple of kilometres to the school to speak to the headmaster Andrew.

Andrew is a young man, affable but serious. He was happy to have the seismometer in his school yard; he even offered to let us stay in one of the spare huts on the school grounds that serve as housing for the teachers. He got some of the children to clean it out and voila we’ve got accommodation for the night! The children bring over a few bananas and some boiling water to supplement our dinner of pot noodles, spicy tuna, coconut flesh and Highway beef biscuits.

We sat under the stars with Andrew and chatted a little bit about being teachers. Andrew has a difficult job – working in a remote part of New Ireland he is responsible for educating up to 400 children with limited resources. His work is made even more difficult due to the fact that 6 of his teachers went on leave and never returned leaving him short staffed. He said the main reason they left was the relative isolation of the school. He is literally located at the end of the road on the Island, making it hard for him to retain people who don’t have a connection to the area. The knock on effect was that with the teachers leaving, many of the students returned to their villages, which effects the economy of the school because his funding depends on enrolment. Andrew was very positive though, he had infrastructure plans for the school and he had several construction projects going on to improve classrooms and housing. He’ll also be recruiting again in the near future and has a few favourites that he thinks will be a good match.

Nov 25, 2014: We got up at 5 am, and started deploying the seismometer. A few hours later everything was up and running, we showed the kids the seismometer, and the seismic traces. The children are kind enough to help us with a stamp test by jumping in unison and they are delighted to see the results of their jump. After a few group pictures we pack up and started heading back.

Ron, Sai, Paul and I were feeling a little grungy after our mornings efforts, so what do you do when there isn’t a shower for 100 km? Stream bath!! So a dip in the local stream that feeds into the ocean, a little soap and there you have that fresh clean feeling – except for a little gravel in your shorts – the stream was moving pretty fast…

So after that, an 8 hour drive and we arrive back in Kavieng. We had an extra day in Kavieng so went back to the 3T site to check up on the sensor. All looked good. We’ll be back in 6 months to get the data. Next stop, Lihir Island!

Nov 27, 2014: We landed in Lihir, known primarily for its gold mine, and we met up with the Lihir Mine Liaison for the MRA, Gabriel Tukas, who arranged logistics for us. He had lined up three potential locations for the seismometer and sorted out permission from the Newcrest mining company for us in advance. The first place he takes us to is Lihir secondary school, which looked to be an ideal location – hole in one! We have a quick meeting with the Assistant Principal James Nebisso to confirm the permission and away we go! This was probably the quickest seismometer deployment during the whole trip.

We weren’t sure of the facilities in Lihir and were worried that we wouldn’t get a battery. Since Lihir was just off the coast from Namatanai in the New Ireland Province, we requested a local who was super helpful and carried our battery on a dingie a day before we arrived in Lihir.

We had a little extra time after the deployment and decided to take a ride around the island – see the sights – mainly the giant gold mine! We drove counter clockwise around the island and save the gold mine for last. Sai was driving and having a blast fording streams and bouncing over the roads. Ron explained to us that the mine is an exemplar for mines in PNG – as part of their lease they were obligated to develop the infrastructure on the island and minimize their environmental impact. As part of their gold mining activities the mining company developed a 60 MW geothermal plant to supply power to the island. Ron’s kind of into geothermal these days. In a country full of active volcanoes I guess it makes sense. I didn’t see the mine on the flight in, as it was a little cloudy, but as we drove up to the mining operation I was taken aback by the scale. There is the processing plant were the ore is refined which seems to take up over a half a mile of the road, which is then followed by the pit mine which laterally engulfed most of the hills next to us. Ron explained they are digging into the caldera of the volcano down to almost 400 m below sealevel! We also drove past what looked like miles of conveyor belts, which actually move the ore from the pit to the processing plant. Within the pit several steaming water injection wells for the geothermal plant were visible. We drove past the power generation plants and I was duly impressed by the scale of the operation.

This brings us to the end of Part 2 of our expedition. We will cover the historic town of Rabaul, Kimbe and the Kiriwina Island in the final blog post.