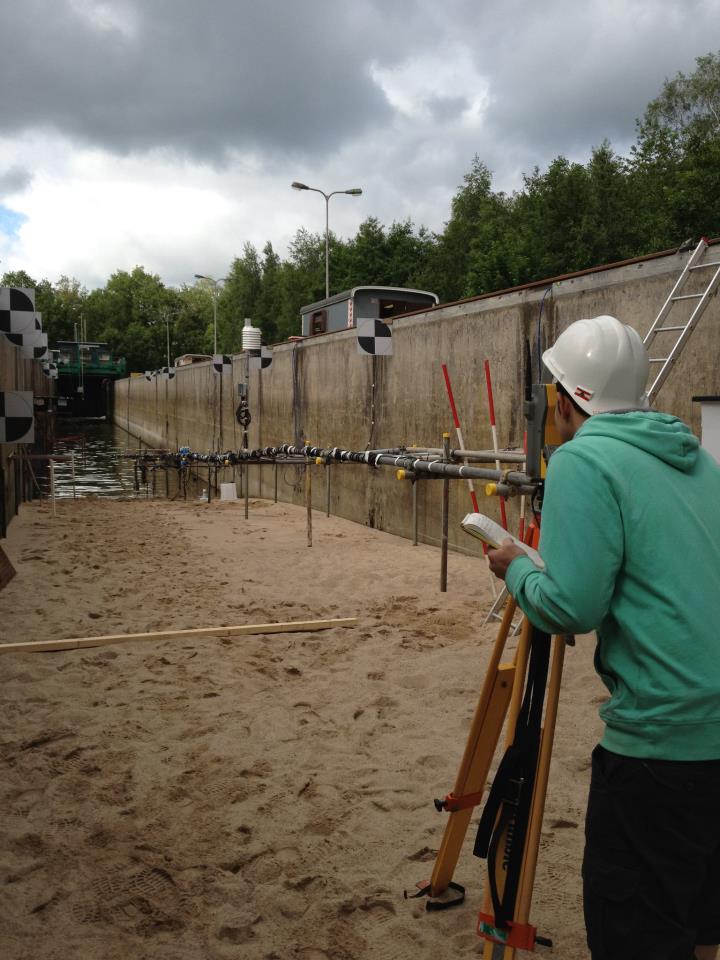 During June and July 2012, Dr Charlie Thompson and Mr Hachem Kassem, from the Geology and Geophysics Research Group, participated in the Hydralab IV, EU funded Barrier Dynamics Experiment (BARDEX II), at the Delta Flume Facility in the Netherlands. The overall aim of the project was to collect prototype data set on sandy beaches to improve our quantitative understanding and modelling capability of shallow water sediment transport processes in the inner surf, swash and overwash zones.  The project was hosted by Deltares and involved 25 researchers plus assistants; from 9 different universities (Algarve, Bordeaux, Copenhagen, Delaware, New Hampshire, New South Wales, Plymouth, Southampton, Utrecht). Our involvement is through work package 5 on Nearshore sediment resuspension and bed morphology. A prototype scale sandy barrier beach was constructed in Deltares’s large Delta Goot flume facility (240m long, 5 m wide and 7 m deep). The sandy barrier itself was just over 100 m long, fronted by a “sea” and backed by a lagoon, with water levels in both adjusted via a series of large pumps. This was essentially to change the hydraulic gradient within the barrier and to simulate tides on the seaside.

The University of Southampton team was involved in the 5th work package of the Bardex 2 experiment; lead by Dr Charlie Thompson. This package was concerned with sediment transport processes in the nearshore region (just offshore of the surf zone), and aimed to observe and measure vortex resuspension processes and bedform dynamics under shoaling and breaking waves, as well as quantifying changes in the magnitude and direction of sediment transport in the region outside of the surfzone.

A recent publication in JCR, which was also presented at the International Coastal Symposium ICS2013, provided preliminary results from the fifth work-package. Initial findings indicate that sediment suspension in the nearshore appears to be controlled by a combination of near-bed turbulent bursting processes which results in near-instantaneous low concentration suspensions restricted to the bottom boundary layer, and vortex shedding from bedforms which results in higher concentration suspensions which are larger in scale than vertical eddy sizes, and perpetuate outside of the bottom boundary layer. Further work will determine the relative importance of the two suspension processes to bedform relaxation times, effective bed roughness, exchanges of sediment with the surf zone, and to large-scale morphological changes on the beach profile.