Dr William Batten, Dr Patrick James and Mark Jentsch were invited to take part in a renewable energy workshop in Malaysia as part of a UK delegation from three universities. The workshop was organised by the British Council Malaysia within the framework of the International Networking for Young Scientists (INYS) programme in order to bring […]

A delegation from the School of Civil Engineering and the Environment was invited to a workshop on environmental sustainability hosted by the University of California San Diego. Prof Charles Banks, Mark Jentsch, Prof AbuBakr Bahaj, Prof Mike McDonald and Prof Mutasem El-Fadel attended the workshop, which aimed to set up research partnerships between leading academics […] 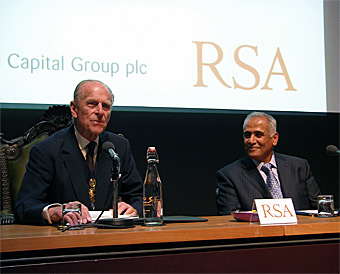 Presentation at the Royal Society for the Encouragement of Arts, Manufactures & Commerce (RSA) Sigma President’s Lecture

Members of the IDCOP research team presented their current work on climate change weather file generation for thermal building simulations to the UKCIP team in Oxford. An automated form of generating simulation weather files in TMY2 (Typical Meteorological Year) format using UKCIP data was presented. Further steps of how to disseminate this tool to the […]

Prof AbuBakr Bahaj was invited to give a presentation at an international workshop hosted by the British Council Germany and the Einstein Forum, Potsdam. The workshop ‘Carbon in the City – International Perspectives’ was held on the 11th of May 2007 at the British Embassy, Wilhelmstrasse 70 in Berlin and brought together experts from India, […]