My fieldwork in Kenya has come and gone in the blink of an eye! I’ve now been back in the UK for almost 3 months, but my arrival in Kenya back on February 22nd, feels like yesterday!

My project focuses on dietary and spatiotemporal resource partitioning between the two apex predators in Lewa Wildlife Conservancy and neighbouring Borana Conservancy (the Lewa-Borana Landscape, LBL): spotted hyenas (Crocuta crocuta) and lions (Panthera leo). My research aims to determine how lions and spotted hyenas compete with one another by gathering data on their behavioural ecology in order to provide management recommendations for their conservation.

Lions have been monitored in LBL for several years, but less is known about spotted hyenas. Where are their dens? What do they eat? Where do they move? How many are there?  In order to answer such questions, I set out to put GPS-GSM collars on several lions and spotted hyenas in LBL. 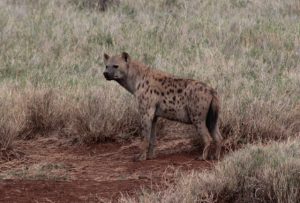 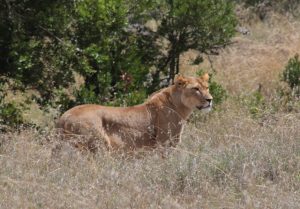 With the help of Lewa’s research department, I spent the first few weeks of my field season focused on collaring individuals. With the help of Dr. Alayne Cotterill from Living with Lions, we managed to collar a hyena on our first night! Within the next four days, we collared three more hyenas! In the end, we managed to deploy collars on six hyenas from five clans and three lions from three prides, far more than I expected to get. The collars provide me with locations of the animals every hour, as well as more fine scale information such as speed, altitude, and elevation. I am planning to use the GPS data to determine home ranges and cores for each of the individuals and determine spatial overlap between the hyena clans and lion prides. I am also comparing hyena communal den site locations to lion core areas. Harry, the second lion we collared

I am also determining activity budgets for the species by comparing average distance travelled at five time windows: dawn, day, evening, night, and overall. While both species are considered nocturnal, I am curious to see if there is some degree of temporal separation between the two. To complete the spatiotemporal picture, I am also including an analysis of concurrent distances between hyena-lion pairs. For every hyena-lion pair that has home range overlap, I am hoping to compare their actual distance from one another at the same time versus the distance that would be expected purely due to chance; this will tell me if there is avoidance or attraction between the two.

Scat analysis is another major aspect of my project. I currently have 88 lion and 118 hyena scats in my database. I am comparing their prey preference to determine dietary separation between the two by using a reference collection of hair samples. 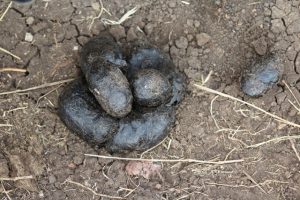 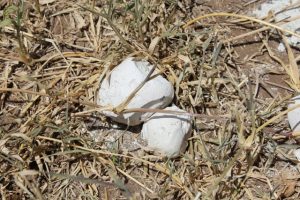 Finally, I am helping Lewa’s research department by developing an ID database of their hyena population. Hyenas are very easy to identify, as their spot patterns are as unique as a human’s finger print or a zebra’s stripes. This will allow the department to work out clan associations and aid in their effort to monitor their spotted hyenas long-term. This involves photographing hyenas opportunistically and with the use of camera traps at den sites.

I am now focusing on data analysis and writing up my dissertation. Over the next few weeks I will be busy using ArcGIS and SPSS to examine resource partitioning within the three major themes of my study: dietary, spatial and temporal. I am also going through camera trap photos from dens to help develop the ID database for Lewa’s research department. By the end of this project my hope is to develop foundational knowledge on large carnivore ecology in Kenya and ultimately go on to publish this research.