My research project was based in Lewa Wildlife Conservancy in northern Kenya, where the whole team spent ten days last November. It was strange to return without the rest of the team, but Suren and I were glad to be spending ten weeks in this beautiful landscape.

The focus of my research was estimating population sizes of the large carnivores in the reserve, including lion (Panthera leo), spotted hyena (Crocuta crocuta) and leopard (Panthera pardus). This is very important in this area, as a balance needs to be struck between the popular carnivore species and the endangered prey species, including Grevy’s zebra (Equus grevyi). The numbers of hyenas and leopards in the conservancy wasn’t known when I started my fieldwork – but thanks to a few different scientific methods we now know roughly how many carnivores are in the area. 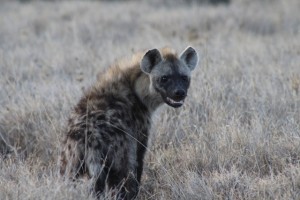 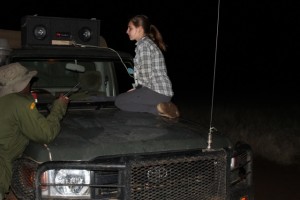 Set up for call-up survey

One of my main field methods is known as a call-up survey. This basically involves playing the sound of a distressed buffalo from a large speaker, on top of a vehicle, into the savannah at night. This sound attracts lions and hyenas to the vehicle, so that they can be counted. Under the supervision of Zeke Davidson, Marwell’s field biologist in Kenya, I set up stations all across Lewa and the neighbouring Borana Conservancy to try and estimate the whole population. The work took place across two, two-night periods with two teams covering the whole area. We were out all night, sometimes seeing the sun coming up in the morning as we returned to camp, but it was amazing to see these carnivores up close in the dark.

I also wanted to survey the leopards in Lewa and Borana, but because they’re shy they didn’t respond to any of my call-up surveys. Camera traps were put up in various leopard “hotspots” where they’ve been seen before by rangers or tourist guides, or where we found tracks. Using this remote method, we avoided disturbing the animals, and managed to get some amazing photos of leopards, and lots of other animals too. The photos meant I could individually identify leopards from their coat patterns (which are unique like human fingerprints) and give a minimum population in the area. After some data analysis, and hours of sorting through camera trap photos, I managed to get the first population estimates for spotted hyena and leopards in Lewa and Borana. My time in Kenya was an unforgettable experience. I worked alongside some amazing people dedicated to wildlife and conservation, who were so helpful and friendly, and spent long hours in the field collecting data for my project. I also had the privilege of observing the translocation of a number of Black Rhino (Diceros bicornis) to Sera Community Conservancy where they have been missing for 25 years after poaching decimated their populations. But of course I made time for lots of extra game drives and sundowner drinks, as well as walking through the forest to the Blue Pools for a swim, and meeting lots of fascinating people.