The focus of my research project is to release a group of Tunisian Spur-thighed tortoises (Testudo graeca nabeulensis) back into their native range of Tunisia. Testudo graeca nabeulensis is an endemic species, threatened by illegal collection for both the local and international pet trade and food markets. Following repatriation to Tunisia, all seized tortoises undergo a 6-month quarantine period before being released into Boukornine National Park. I will be investigating whether management variables of the release strategy have an impact on post-release dispersal patterns. The aim of my project is to determine the optimum protocol for successful repopulation of an area with Testudo graeca nabeulensis, for the proposed strategy of repopulating other areas of Tunisia in the future. After an intense few weeks of project planning in the UK, my arrival in Tunisia at the end of March brought a mixture of both nerves and excitement. On my first day I visited the rehabilitation centre, ‘Centre de Rehabilitation Tortue Tunisienne, Projet Fakroun’ in Boukornine NP to meet my colleagues, a group of Tunisian veterinary students, the park conservator and the park guards. Although the language barrier was a challenge, everyone was very welcoming and this made me even more eager to start my data collection.

Under the supervision of Marwell Wildlife’s field biologist, Dr. Marie Petretto, I began my fieldwork by choosing suitable release sites within Boukornine NP, designing temporary enclosures for the soft-release, and selecting and preparing the rehabilitated tortoises for release. The next challenge was fitting these selected tortoises with radio transmitters using resin and silicon, and then keeping them still whilst they dried – surprisingly easier said than done! In addition to the tortoises equipped with transmitters, a number of tortoises marked individually were also selected for release in order to investigate the effect of group size on post-release dispersal. 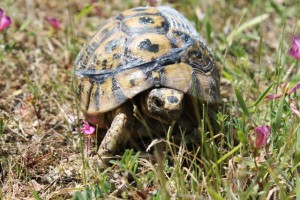 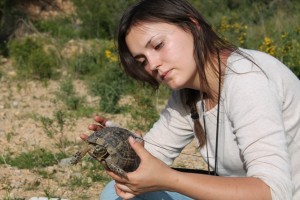 Pasting on a radio transmitter

The pre-release phase of the project also required assessing the population of wild tortoises within Boukornine NP, which involved actively searching the highs and lows of the dense Thuya and Aleppo Pine, mountainous forest. A number of the wild tortoises found were also fitted with radio transmitters to enable me to follow their movements throughout the rest of the study, allowing me to evaluate their home range size and habitat use for later comparison with the release tortoises. Up until the release phase, I spent my days in the field radiotracking wild tortoises equipped with transmitters, and applying mark-recapture protocol by actively searching for other wild tortoises I had found and individually marked. After 12 days in the soft-release enclosures, allowing acclimatisation to the surrounding environment, the tortoises were released into the wild. Physically taking part in releasing these animals rescued from illegal wildlife trade back into the wild was enormously rewarding, and I feel extremely privileged to have had the opportunity to manage such an important project; this was day that I will never forget!

I spent the time from the release until the end of my fieldwork in mid-May in the post-release phase of the project. This involved radiotracking the wild and released tortoises on alternative days. As the released tortoises continued to disperse and establish their home range, radiotracking became more challenging but I continued to enjoy every minute!  Now that I am back in the UK, I am focusing on finishing my methodology write-up and starting the challenge of statistically analysing my data. 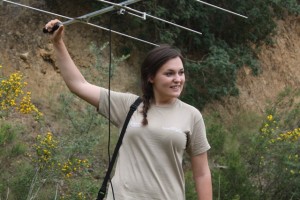 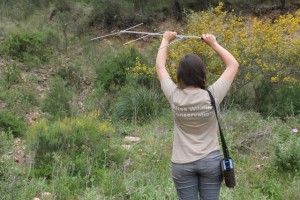 Highlights from my research project so far: